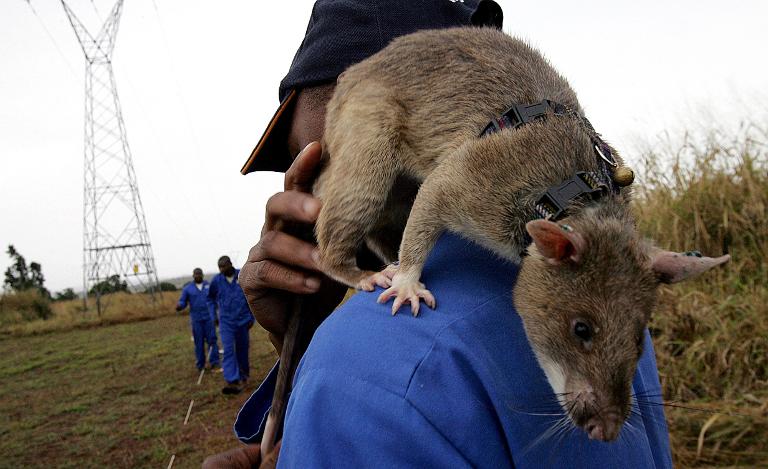 Cambodia is training an elite squad of rats, imported from Africa, to sniff out landmines and other unexploded ordnance in the once war-wracked kingdom, authorities said on Friday.

A team of 15 rats, some weighing up to 1.2 kilograms, were imported from Tanzania in April with the help of a Belgian non-governmental organisation, which trains rats to sniff out mines, Heng Ratana, director general of Cambodian Mine Action Center (CMAC), told AFP.

“If the rats pass the test, we will use them… if they are not qualified, we will end the program,” Ratana told AFP.

He said there have been claims of success in using rats to sniff landmines — as well as detect tuberculosis — in several African countries including Tanzania, Mozambique and Angola.

The rats are now being trained by experts in northwestern Siem Reap province, home to Cambodia’s famed Angkor temples complex.

But one of the rodents has already died probably because of the change in climate, he said.

Experts plan to begin testing the rats over the next few weeks.

The rodents will be put through their paces on a number of tasks, including to establish if they can sense all types of mine, whether they can detect buried ordnance and how fast they work, he said.

“They will test the rats in actual landmine fields,” he said.

“At this stage, it is too early to say if we can use the rats,” Ratana said, adding that two Cambodian mine experts had been trained in Tanzania and they were now sharing their expertise with their colleagues.

Nearly three decades of civil war gripped Cambodia from the 1960s, leaving the poverty-stricken nation both one of the most heavily bombed and heavily mined countries in the world.

Last month, a new Cambodian underwater demining team pulled an American-made bomb from the Mekong River for the first time as the country battles the wartime legacy of unexploded mines that have killed thousands — detonating when trodden on.

Teams of deminers face the unenviable task of trying to locate and safeguard huge quantities of unexploded ordnance that has killed nearly 20,000 people and wounded double that number since 1979.

According to Cambodian government statistics, 154 people were killed or injured by leftover mines in 2014, and 111 the year before.