Home Politics 50 shades of RaGa, in 45 years only 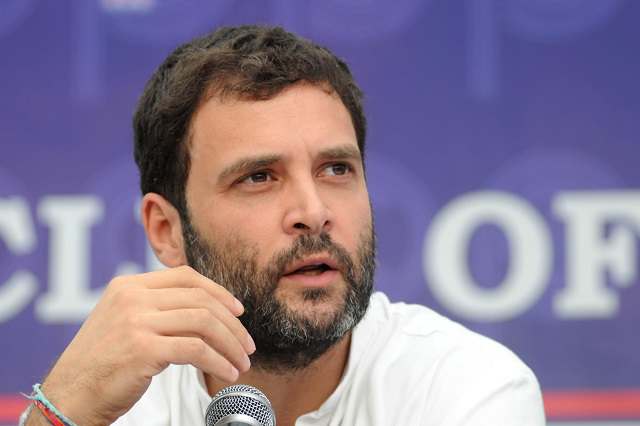 New Delhi: Wishes poured in like rain lashing twitter, as if the micro blogging site was made for this day. Itâ€™s the birthday of our very own Congress Vice-President and the talk-of-the-town Rahul Gandhi, better known as RaGa.

RaGa, who turned 45 on Friday, was also wished by Prime Minister Narendra Modi.

The birthday boy was quick to return thanks to the Prime Minister. â€œThank you for your best wishes @narendramodi.â€

One birthday and a bitter-sweet relationship came from under the wraps.

After many years, Rahul will be in the national capital on his birthday and Congress workers have made elaborate arrangements to celebrate the occasion. Party supporters will cut a birthday cake weighing 45-kg outside his residence 12 Tughlaq Lane.

A procession will be taken out to his residence from Malcha Marg with flower decorated rath and a cavalcade of cars adorned with party flags, banners and cut outs of Rahul.

On the occasion of his birthday, hereâ€™s a look at some â€˜Pappu momentsâ€™ that have made him the toast of social networking sites.

After Congress’ defeat in Lok Sabha elections 2014, where Congress chief Sonia Gandhi was giving speech in press conference on party’s defeat, Rahul was seen smiling all the way. Rahul Gandhi sparked controversy over his smiling face on stage during Sonia’s speech after Congress’ worst defeat. He faced criticism everywhere for his action.

Recently, TV cameras caught Rahul Gandhi looking at his phone while writing a tribute on the Nepal tragedy that led people to believe he was copying the text.

As soon as this news broke out, everyone started criticising Rahul Gandhi and cracking jokes on him. Twitterati even trended the hashtag #PappuCantWriteS**la.

But the Congress Vice -President took everyone by surprise when he claimed that he was checking the micro-blogging website, Twitter, on his phone and not copying the text.

The Nation got to know!

According to viewers, the interview of RaGa with Times Now Managing Editor Arnab Goswami was one of the â€˜funniestâ€™ episodes ever. It was also called â€œthe most hilarious political interview of all time.â€

It was evident that Rahul Gandhiâ€™s first television interview didnâ€™t go too well for him, or for his party. Describing the 80-minute-long interview, The New York Times said, â€œMr. Gandhi fumbled, stared with a blank expression and a tilted head and looked wounded at times.â€

He might have returned with a bang (after 56 days), but Tweeteratis, who often attack Rahul Gandhi and make fun of him, did not leave the opportunity this time either.

Soon after his arrival, the hashtag #RahulReturns became a top trend in India. Jokes and comments on the Gandhi scion were being shared religiously on social media. Not only common people, the ruling BJP also took a dig at Rahulâ€™s arrival.

While Lutyens Delhi is abuzz about Rahul 2.0, there seem to be a few areas of concern.

While it is hard to say whether Rahul will ever be able to emerge from Sonia Gandhi or even Priyankaâ€™s shadow, one thing is certain that his extended break from Indian politics has done him a whole lot of good.