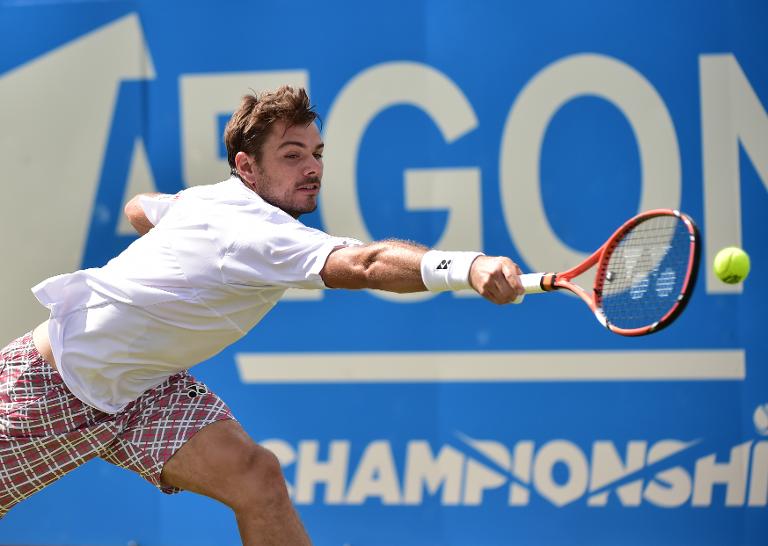 Stan Wawrinka became the latest star to suffer a shock exit from Queen’s Club as the French Open champion was beaten 7-6 (7/4), 7-6 (13/11) by South Africa’s Kevin Anderson on Wednesday.

Just 24 hours after Rafael Nadal’s first round defeat against unheralded Ukrainian Alexandr Dolgopolov, it was Wawrinka’s turn to succumb to an unexpected loss at the Wimbledon warm-up event.

The Swiss second seed had swept through his first round clash against Australian Nick Kyrgios in just 49 minutes as he looked to follow his memorable final triumph over Novak Djokovic in Paris with his first ever grass-court title.

But, in the second round, Wawrinka couldn’t find a way to subdue the big-serving Anderson, who fired down 22 aces en route to his first win over a top five ranked opponent this year.

“I did one big mistake when I had the set point, but that’s it. In general he was playing really well,” Wawrinka said.

“I couldn’t find a solution. I expected him to miss a few shots, especially when it’s important. It didn’t happen today.”

Wawrinka had been hoping to extend his winning run to nine matches, but the towering 6ft 8in Anderson had won their last three meetings, all in 2014, and he proved a thorn in the 30-year-old’s side again.

“He’s a terrific player so it means a lot to me,” Anderson said.

“It gives me confidence knowing the guy I beat just won the French Open. To do it on such a great court makes it extra special.”

A hard-fought first set looked to have swung Wawrinka’s way when he secured two set points at 6-5, only for the Swiss to let Anderson off the hook as the 29-year-old raced through the subsequent tie-break.

The superstitious Wawrinka was still wearing his ‘lucky’ pair of garish red, white and grey checked shorts that caused a stir during his triumphant run in Paris, but his fortune took a turn for the worse in the second set.

In the quarter-finals, Anderson will play Spain’s Guillermo Garcia-Lopez, who succeeded where Nadal failed with a 6-3, 7-6 (7/4) over world number 79 Dolgopolov.

Kokkinakis has spent much of this week in the air after making the long flight back to Australia to spend a day at home with his sick grandmother before an unscheduled return to Queen’s.

The highly-rated world number 70 had jetted back to Adelaide to be with his family after the French Open, only to discover on landing that he had been offered a wildcard entry into the Wimbledon warm-up event.

Kokkinakis got back on a plane, shrugged off the inevitable jet-lag and captured his first tour-level win on grass against France’s Jeremy Chardy before his exertions caught up with him in a tired display against Simon 24 hours later.

Raonic is playing his first tournament for five weeks following foot surgery that forced the world number eight to miss the French Open.

The 24-year-old, who reached the Wimbledon semi-finals last year, looked a little rusty on his return in a first round three-set win over British wildcard James Ward.

Once again Raonic was pushed hard against Gasquet, who secured his 400th career victory in the previous round, but he eventually hit peak form to demolish the world number 19 in the final set.

Day Two Of Winter Session of Parliament; Here’s What To Expect