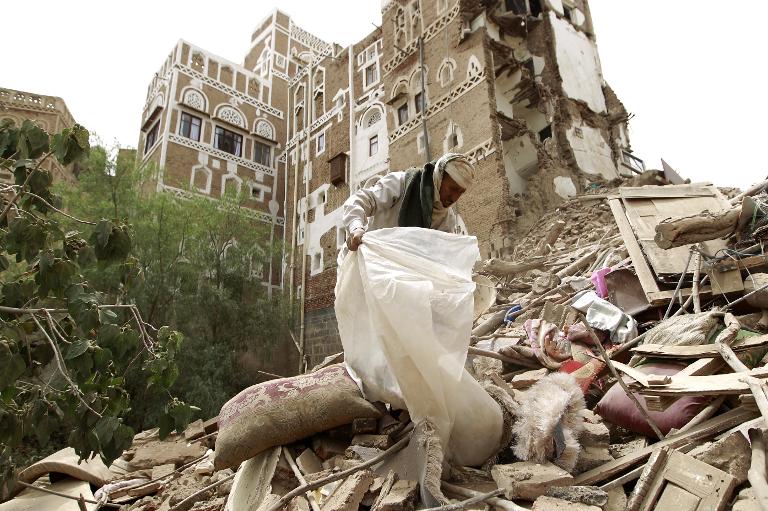 The United Nations on Wednesday extended stalled Yemen peace talks taking place in Geneva, with both the exiled government and the Iran-backed Yemeni rebels accusing each other of trying to sabotage the process.

In the Yemeni capital meanwhile, at least 31 people were killed and dozens wounded in five simultaneous bombings claimed by the Islamic State group at Shiite mosques and offices.

The radical Sunni Muslim IS group said the attacks were in “revenge” against Shiite Huthis who have overrun Sanaa, and much of the Sunni majority country.

The bombings took place as peace talks in Geneva stumbled and delegates from both sides told AFP that the talks initially due to wind up on Thursday had been extended until at least Friday.

UN special envoy for Yemen, Mauritanian diplomat Ismail Ould Cheikh Ahmed, met the rebel delegation in a swish Geneva hotel in the evening after talks early in the day with the exiled government delegation.

The third day of the high stakes talks, launched by UN Secretary General Ban Ki-moon with an appeal for a badly-needed two-week humanitarian truce, also stumbled over the makeup of the different delegations.

“We discussed the truce but the other side is setting unacceptable conditions,” rebel delegation member Hassan Zeid told AFP. They were demanding a rebel retreat from Aden and Taez, where fighting is continuing.

Huthi rebels and their allies, troops faithful to ousted president Ali Abdallah Saleh, favour a truce but are refusing to withdraw as demanded by the government in exile, which is backed by Saudi Arabia.

“The only positive point so far is that the negotiations are continuing and that no delegation has slammed the door,” said a Western diplomat close to the talks.

The UN special envoy has urged the warring sides to bend, stressing the dire situation in Yemen where more than 2,600 people have been killed since March and about 21 million people are in severe need of humanitarian aid.

But the positions of the two warring sides are so far apart that they are not sitting in the same room and the UN is holding separate consultations with them.

“In a situation like this, the Yemenis need to talk among themselves, not with the United Nations,” Ould Cheikh Ahmed said.

He also said late Tuesday that the talks so far had focused on trying to get the rebels to whittle down their team from 22 to the pre-agreed 10.

“We believe that in order to commence, the numbers need to be reduced and there has to be a balance between the two teams,” he said.

The rebels rejected that their delegation size was a sticking point.

“Our main demand is that the UN consider these talks as consultations between different Yemeni political parties, and not between different camps,” Faiwa Sayed, a leader of the General People’s Congress, the former ruling party still headed by the former president told AFP.

The exiled government’s delegation was also shrouded in controversy after it became apparent that a man on the US blacklist of suspected Al-Qaeda supporters was on its team.

Abdel Wahab al-Humayqani, who heads the hardline Islamist Al-Rashad party in Yemen, took part in the opening of the peace talks in the Swiss city on Monday, where he was photographed with Ban Ki-moon.

Humayqani, who was added to the US blacklist in December 2013 suspected of financing Al-Qaeda in the Arabian Peninsula, also figures on a list of delegates of the government in exile, as a representative of Al-Rashad.

“I categorically deny these accusations and challenge the United States to prove them,” he told AFP.

The government delegation met Wednesday morning with a group of 16 diplomats from large powers within the EU and the Gulf countries, who are following the talks.

As a sign of the chaos surrounding the talks, Yemeni Foreign Minister Riad Yassin and other delegation members, including Humayqani, marched into a scheduled news conference at the UN in Geneva and told a room full of journalists the conference was postponed “because we want these consultations to succeed.”

Ould Cheikh Ahmed has insisted that just getting the two sides to Geneva at the same time was “an achievement”.

Beyond being in the same city though, neither side has shown any signs they are prepared to budge on the issues.

Yassin repeated the exiled government’s stand that a rebel pullout was non-negotiable.

The rebels control a vast swath of territory, including the capital Sanaa.

On Tuesday they accused Saudi Arabia, behind coalition airstrikes on the country since March 26, of trying to torpedo the peace talks.

And Abdulmalek al-Huthi, the leader of the Shiite rebels who bear his name, said the government was trying to use the UN special envoy as a “tool”.

Yemen has been wracked by conflict between Iran-backed Shiite rebels and troops loyal to exiled President Abedrabbo Mansour Hadi, who fled to Saudi Arabia in February.