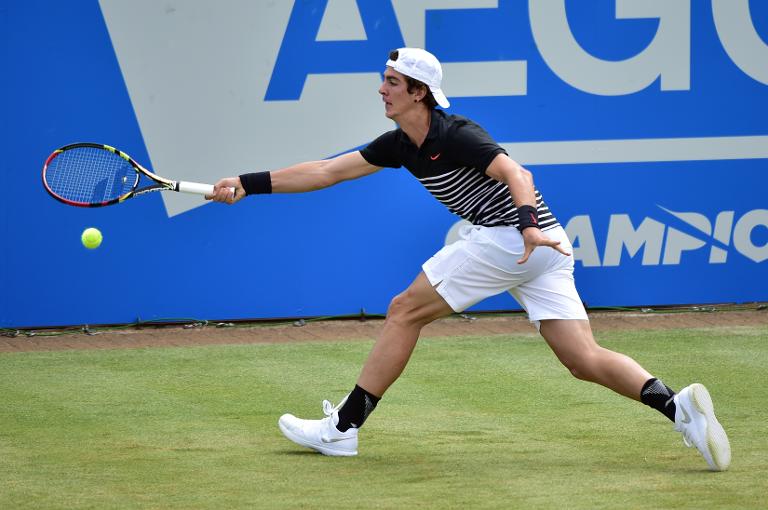 Australian star Thanasi Kokkinakis admitted he let himself become distracted by the celebrity-packed crowd during his second round defeat at Queen’s Club on Wednesday.

Kokkinakis suffered a 6-4, 6-2 loss against French seventh seed Gilles Simon at the Wimbledon warm-up event and the teenager claimed it was the presence of a couple of famous centre court spectators that caused him to take his eye off the ball.

A day after Chelsea manager Jose Mourinho and Juan Carlos, the former King of Spain, were in attendance to watch Rafael Nadal, it was One Direction pop star Liam Payne and controversial television motoring presenter Jeremy Clarkson who left the Adelaide-born Kokkinakis a little star-struck.

Kokkinakis is a big fan of Clarkson, who was suspended from Top Gear duties by the BBC in March this year after a row with a producer on a location shoot.

“I saw that and got a bit distracted actually,” Kokkinakis said when asked about Clarkson’s appearance.

“Oh, there he is from Top Gear. Again, a disappointing performance in front of him.

“What can you do sometimes? Was the guy from One Direction here too? Yeah, I’ve just got to do better than that really.

“I got distracted a little bit. At least I saw some important faces in the crowd!”

When asked if he was a One Direction fan, Kokkinakis replied: “No, I mean, I have listened to a couple of songs but I wouldn’t say I’m a die-hard fan.”