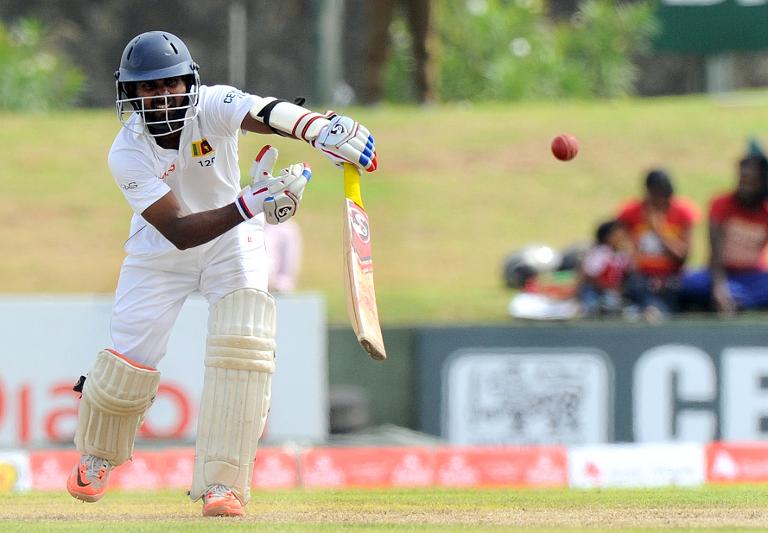 Sri Lanka’s Kaushal Silva and Kumar Sangakkara closed in on an unbeaten century stand to frustrate Pakistan at the start of the rain-hit first Test in Galle on Thursday.

The pair put on 93 runs for the second wicket as the hosts carried their lunch score of 40-1 to 123 without further loss by tea on the scheduled second day at the Galle International Stadium.

Silva was unbeaten on 52 and Sangakkara was on 41 after Pakistan captain Misbah-ul Haq surprisingly elected to field first on an easy-paced pitch after winning the toss.

Left-handed Sangakkara, Test cricket’s current leading run-scorer, who is expected to retire during the home series against India in August, has so far hit two boundaries and a six.

Pakistan could have removed Sangakkara when he was on 24, but Azhar Ali at short-leg spilled a sharp chance off leg-spinner Yasir Shah.

Silva, looking comfortable against both pace and spin, has eight boundaries to his name in his eighth Test half-century.

After inclement weather had washed out the entire first day’s play on Wednesday, the match began two hours late on the second day due to a wet outfield at the Galle International Stadium.

Left-handed Dimuth Karunaratne scored 21 in an opening stand of 30 with Silva when he was dismissed by left-arm seamer Wahab Riaz in the 13th over of the innings.

Karunaratne attempted to pull a short ball but only managed to edge a catch to wicket-keeper Sarfraz Ahmed to provide the tourists a much-needed breakthrough.

Wahab had Karunaratne caught in the slips off a no-ball in his first over before umpire Paul Reiffel warned the bowler for running on the wicket on his follow-through later in the same over.

The prolific Sangakkara, who took a break from his English county commitments with Surrey to play for his nation, began ominously by driving his first delivery from Wahab to the mid-on fence.

Rain has been forecast in the southern coastal town for all five days of the match.

Sri Lanka and Pakistan are due to play three Tests, followed by five one-day internationals and two Twenty20 matches.