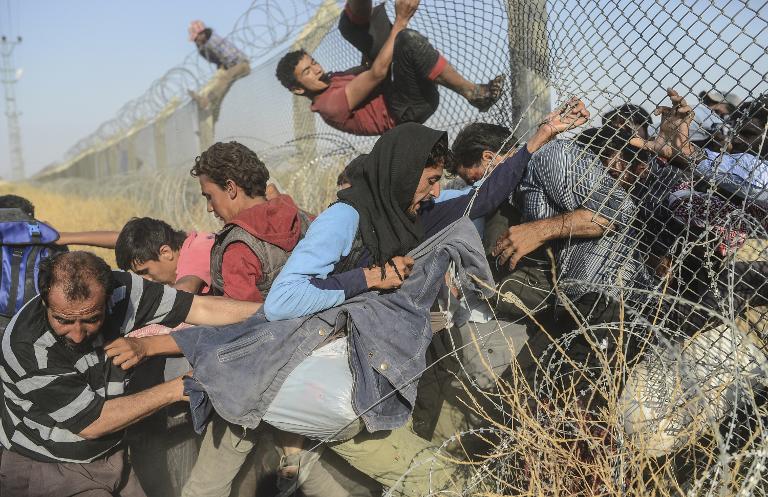 Conflicts and violence raging around the world sent the number of people forced to flee their homes soaring to a record 60 million by the end of last year, the United Nations said Thursday.

That is 8.3 million more refugees and internally displaced people (IDPs) in the world than in 2013 — the highest-ever increase in a single year, the UN refugee agency said in a report titled “World at War”.

“We are witnessing a paradigm change, an unchecked slide into an era in which the scale of global forced displacement as well as the response required is now clearly dwarfing anything seen before,” UN High Commissioner for Refugees Antonio Guterres told reporters ahead of the launch of the annual report.

Some 59.5 million individuals were displaced from their homes worldwide at the end of 2014, “as a result of persecution, conflict, generalised violence, or human rights violations”, the report showed.

That is up from 51.2 million in 2013 and from 37.5 million a decade ago, and if these people were lumped together as a nation, it would be the world’s 24th largest.

Of the total, 19.5 million were refugees, 1.8 million were asylum seekers and 38.2 million had fled their homes but stayed in their country, the report said.

More than half of the world’s refugees are children, up from 41 percent in 2009, while the total number of people who fled their homes has spiked by 40 percent in just three years.

“Things… are getting out of control simply because the world seems to be at war,” Guterres said, stressing that the conflicts in Syria and Iraq alone had forced 15 million people to flee their homes.

But they are far from the only conflicts forcing people to seek safe haven. In the last five years, at least 14 conflicts have erupted or resumed worldwide — more than half of them in Africa.

“We do not have the capacity, the resources for all victims of conflicts. We are no longer able to pick up the pieces,” the commissioner said.

“In Europe, more than 219,000 refugees and migrants crossed the Mediterranean Sea during 2014. That’s almost three times the previously known high of about 70,000, which took place in 2011,” the report said.

Despite fears expressed in European countries and other wealthy nations over the growing refugee and migrant influx, the report showed that developing countries are hosting a full 86 percent of all those who had fled war or persecution in their countries.

The number of Syrian refugees taking shelter in Turkey has further risen this year to more than 1.7 million, according to the latest UN data, since war broke out in Syria in 2011.

Speaking in Istanbul to launch the report, Guterres urged the world including Western states to open up their borders and follow Turkey’s “example” in hosting Syrian refugees.

He said Turkey’s generosity has a special meaning in a world where “so many borders are closed or restricted and where new walls are being built or announced.”

UNHCR said it has received information of over 3,500 women, men and children reported dead or missing in the Mediterranean Sea during 2014.

The Ukraine conflict meanwhile led the number of refugees in Russia to rise to 231,800 by the year end, up from 3,400 only 12 months earlier.

Ukrainians constituted 98 percent of all refugees in Russia.

In sub-Saharan Africa, the number of refugees increased for the fifth consecutive year, standing at 3.7 million in 2014, some 759,000 more than a year ago.

Guterres appealed to the world to loosen its purse strings and provide shelter to those fleeing wars and persecution.

“For an age of unprecedented mass displacement, we need an unprecedented humanitarian response and a renewed global commitment to tolerance and protection for people fleeing conflict and persecution,” he said.

Facing a massive influx of vulnerable migrants and refugees risking their lives to reach Europe by sea, Europe has so far failed to agree on how to deal with the thousands of new arrivals.