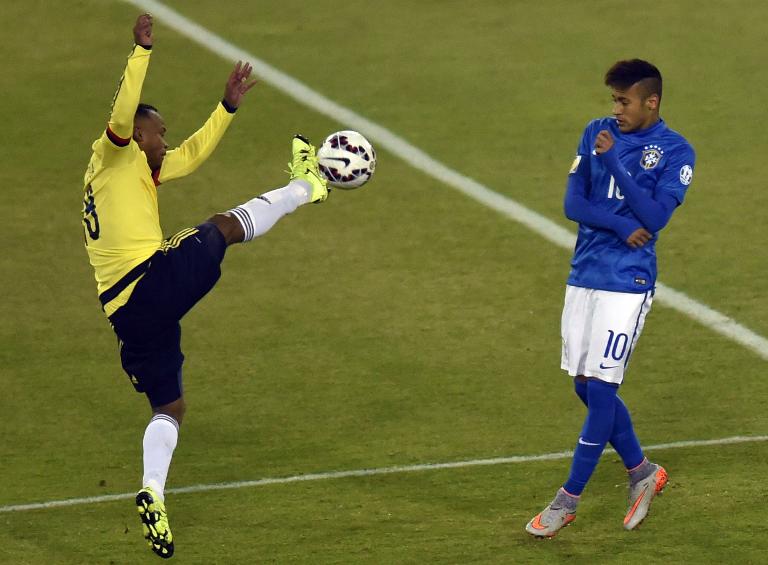 Brazil captain Neymar faces a nervous wait to discover his Copa America fate after getting sent off in a post-match fracas as the five-time world champions crashed to a 1-0 defeat against Colombia on Wednesday.

Neymar risks a two-match suspension — ruling him out of Brazil’s final group game and the quarter-finals — after appearing to aim a headbutt at Colombia goalscorer Jeison Murillo following the final whistle.

Tournament disciplinary chiefs are expected to confirm the length of Neymar’s suspension on Thursday, but reports in the Brazilian media said the 23-year-old Barcelona star faces a two-game ban.

The striker had already picked up his second yellow card of the tournament for a deliberate handball — automatically ruling him out of Sunday’s final Group C match with Venezuela — when referee Enrique Osses showed him a straight red.

Neymar was scathing of the match officials after Brazil slumped to their first loss to the Colombians in 24 years.

“In my view the rules are always used against me,” Neymar told Brazilian media, criticizing Osses’ decision to caution him for a handball in the first half.

“I was off balance, the ball hit my hand but it was not intentional. They put a weak referee in there to whistle up for all that. The team didn’t play well.”

Brazil coach Dunga also laid blame at Osses’ door after the defeat, which complicates his team’s route to the knockout rounds.

“He allowed rough play and provocation and then we had the lamentable scenes at the end,” Dunga complained.

“Referees have to stop thinking that they are the stars, the stars are not them — they are there to control the game,” Alves fumed.

“We are used to this in South America — everyone here is against Brazil.”

“They know the personality of Neymar and they went in search of him,” he said. “They tried to provoke him and make him nervous.”

But victory was sweet for Colombia, who were subjected to rough-house tactics from Brazil last year during the World Cup in a 2-1 quarter-final exit, a match scarred by a whopping 54 fouls.

“We had a great gameplan and it worked today,” said Colombia’s Real Madrid star James Rodriguez.

“Four days ago we lost to Venezuela when we played well, tonight we played well and beat Brazil, sometimes it happens like that.”

A pulsating opening 45 minutes saw Colombia gradually get on top after a frantic start dominated by defense.

Brazil, who brought in Thiago Silva at center-back in place of David Luiz, defended in depth throughout, dropping back in numbers and frustrating Colombia’s attack.

Colombia also gave no quarter, with defensive midfielder Carlos Sanchez breaking up Brazil’s attacks in midfield and restricting the five-time world champions to hardly any shots on goal.

Colombia slowly began to get the better of their opponents however, and soon started to threaten.

A Sanchez shot deflected just wide of Brazilian defender Miranda just after the half-hour mark and then on 36 minutes the breakthrough came.

Juan Cuadrado’s teasing free-kick from the right flank dropped into the area and when Brazil failed to clear, Murillo was on hand to rifle in a low shot past Jefferson.

Chelsea star Cuadrado might have doubled Colombia’s lead on 43 minutes but wastefully shot wide after being teed up by Teo Gutierrez’s deft backheel.

Brazil went for broke in the second half, bringing on Liverpool attacking midfielder Philippe Coutinho for Fred, and immediately looked more threatening as a result.

But they squandered a golden chance to equalize on 58 minutes when Bundesliga-based striker Roberto Firmino missed an open goal.

The ball ended up with Firmino after Ospina made a hash of a clearance. But with an open goal begging, Firmino — reportedly a summer transfer target for Liverpool — blazed over the bar.