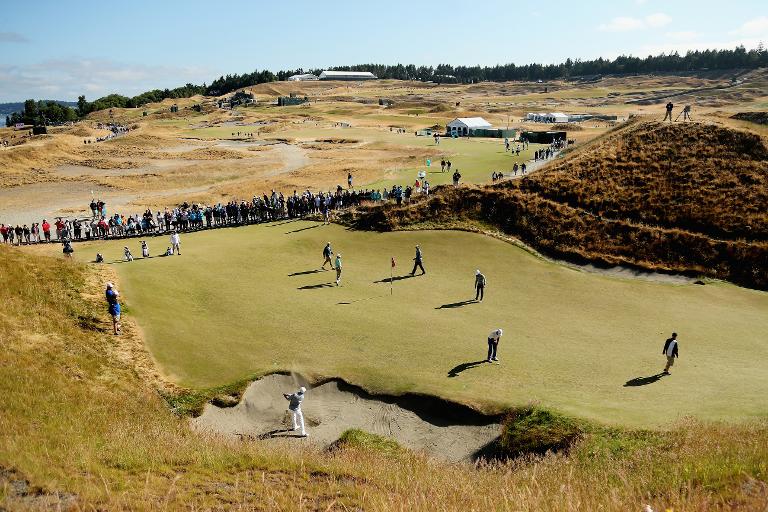 The 115th US Open was set to tee off early Thursday on an untested Chambers Bay layout that has left the world’s top golfers scratching their heads over how best to play it.

World number one Rory McIlroy is seeking a fifth major title, Masters champion Jordan Spieth aims to make it halfway to the fabled calender-year Grand Slam and crowd favourite Phil Mickelson is desperate to finally win a US Open, after six runner-up finishes, and in so doing complete his career Grand Slam.

Three-time champion Tiger Woods, meanwhile, needs to prove he can still compete with the best after a horrendous year which will end with his 40th birthday.

But they all have a common enemy in Chambers Bay, some 50 kilometres (31 miles) south of Seattle, hosting the first US Open to be held in the US Pacific Northwest.

Playing at between 7,300 and 7,700 yards, depending on the conditions, the course is more of a British Open seaside type course than a traditional US Open venue, with its dunes and bunkers, bouncy, undulating fairways, blind shots and large, rolling greens.

But unlike the classic British Open venues, it has a 500-foot elevation from the lowest to the highest point of the course, opening and closing holes which can either be par-4 or par-5 and oddly sloping tee zones.

The record dry sunny weather that has marked the last few weeks in the area also means that the fairways are firm and fast and the greens devilish to read.

Scoured out of a disused sand and gravel quarry overlooking the scenic Puget Sound, Chambers Bay opened just eight years ago and most of the top players have seen it for the first time this week.

McIlroy was among those learning as they go along this week and his reaction to what he saw was typical.

“It’s really like playing an Open Championship in the United States,” the 26-year-old Northern Irishman said.

“That’s what it’s going to be like this week, apart from the fact that it’s about 20 degrees warmer.”

Tour Players are not usually keen in being pulled out of their comfort zone and many at Chambers Bay this week were putting a brave face on it.

Mickelson for one says that it has similarities to the fabled Old Course at St Andrews in that first impressions can be deceptive.

“When you play St. Andrews, you don’t know exactly where to hit it. And certain hillsides will take it one way or the other.

“Knowing how to play it, knowing where to go is critical. But after playing a while it feels like it’s not as difficult a course.”

Fitness will also be a factor with players needing to complete several treks up and down a huge man-made hill that straddles the course.

“I think there is a big fitness element this week,” said 2013 US Open winner Justin Rose. “There are a lot of us who have been here and probably preparing harder for this championship than many others. Because of that there’s an even bigger physical demand.”

The 156-strong players in the field come from 26 different countries and the total of 16 amateurs is the highest for 34 years.

Total prize money for the year’s second major is up to $10 million.