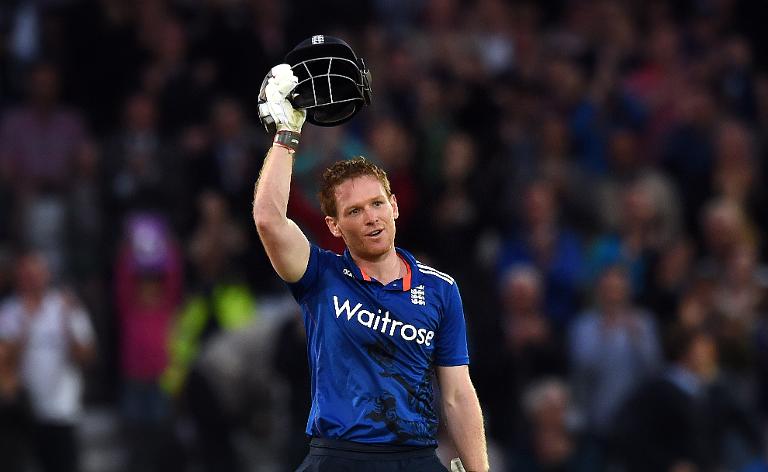 England captain Eoin Morgan said a “carefree attitude” was behind his side’s remarkable one-day revival after leading them to a thrilling seven-wicket win over New Zealand at Trent Bridge on Wednesday.

No England side had previously made more batting second to win an ODI than their 306 for five against Pakistan at Karachi in 2000.

But Morgan’s men overhauled that with ease to post the equal fourth highest chase in all ODI cricket as they levelled the five-match series at 2-2.

But he has now scored 322 runs at an average of 80.5 in four innings this series against the Black Caps heading into Saturday’s decider in Durham.

Wednesday’s win under the Trent Bridge floodlights also meant England had scored over 300 in four successive ODIs for the first time in their history.

It was all a far cry from the World Cup and Morgan, asked to explain the transformation, told Sky Sports: “It’s more the carefree attitude.

“The guys are pretty relaxed in the changing room and we’re trying to keep things as raw as possible and concentrate on the process rather than the result and it seems to be working for us at the moment.”

While delighted with the win, Morgan said embedding the change in approach was key ahead of the 2019 World Cup in England.

“I think the style is more important,” he added.

“We’re trying to change something that probably doesn’t come as naturally as other nations…It’s very encouraging at the moment.”

New Zealand were threatening a huge score at 187 for two off 30 overs and a final total of 349 for seven featuring Kane Williamson’s 90, would have been a winning score more often than not.

But with Alex Hales launching England’s reply with a quickfire 67 off 38 balls on his Nottinghamshire home ground, England were soon in complete command.

“It was an incredible run chase,” said New Zealand captain Brendon McCullum, himself no stranger to whirlwind innings.

“I thought at half way with 350 on the board, it’s a whole lot of runs and we knew they were going to have to play well to beat us and play well they did.

“To win in 44 overs, they blew us off the park again and two great hundred from Morgs and Joe Root — we need to be better than that.

“But credit where credit’s due, they were too good for us today.”

New Zealand badly missed the steadying influence of left-arm seamer Trent Boult, ruled out of the rest of the series with a back injury before the Black Caps’ three-wicket victory in the fourth ODI at Hampshire’s Rose Bowl ground on Sunday.

All-rounder Corey Anderson is also sidelined with a back injury while this series sees New Zealand adjusting to life without Daniel Vettori following the vastly experienced left-arm spinner’s retirement.

“We don’t have Vettori, Boult or Anderson, so we’re having to try to find combinations,” said New Zealand all-rounder Grant Elliott.

“We’ve got some guys here who are probably light on experience but going into series 2-2 and a decider, it’s all set up for the crowds.

“That’s why we’re here isn’t it? A bit of entertainment?”

Wednesday’s match was umpire Steve Davis’s last in the middle before he retires, although the Australian official will be on replay duty in Durham.

“I thought I was going OK until Brendon asked me to lead the players off (the field),” said Davis.

“Then I got emotional. It’s been great to have the respect of the players — I get on well with them and love watching them.

“It’s been a great life and there’s no regrets,” he added.