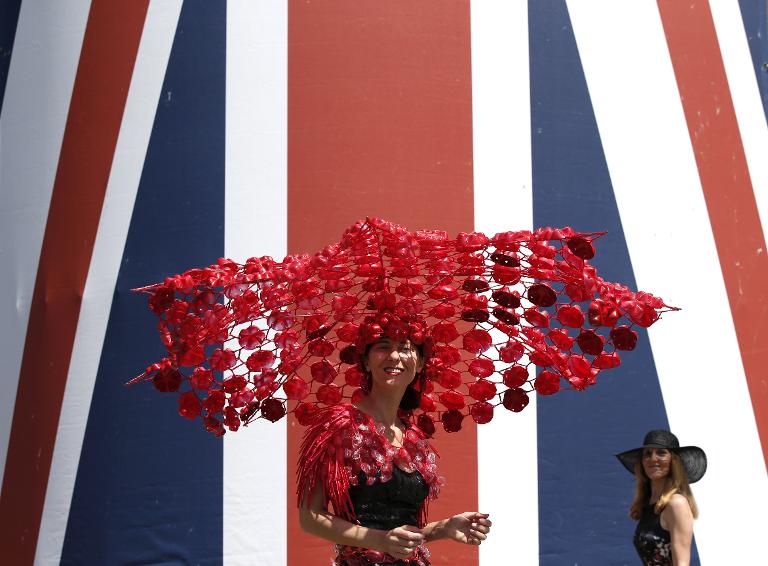 More than 300,000 people are expected during the course of the five-day extravaganza in Berkshire, southeast England, attended yearly by Queen Elizabeth II — with Ladies Day on Thursday a sartorial highlight of the upper class social calendar.

Steeped in three centuries of tradition, and with a strict dress code to observe, the first hurdle for international visitors is negotiating the rules of etiquette.

Taiwanese couple Chinghan Wang and Tienjen Hsieh, who are studying in London, said they spent about a month researching and preparing their outfits.

Tienjen, dressed in top hat and tails, added: “There’s not much of a hat culture in Asia. People would think you were weird if you wore this back home.”

The meeting has attracted a record number of international entries this year as 10 countries are represented across the Group One races, between them fielding 19 horses trained outside Europe.

The line-up includes horses from Australia, Hong Kong, Japan, Sweden and the United States as well as the usual bumper crop from France and Ireland.

“A lot of horses that are running in Britain now are owned by people overseas and they want to have runners at Ascot. We are seeing that more and more,” said Nick Smith, head of Communications and International Racing at Ascot.

The international flavour of the racing is mirrored on the stands where aristocracy and nouveau-riche rub shoulders.

Ladies Day is the key event in style terms, with attendees parading an array of exquisite milliners’ creations teamed with designer frocks.

Anna Mott, the Australian co-curator of London Hat Week, turned heads as she arrived wearing a colourful creation by her compatriot Peggy Lea — a towering display of Australian fauna.

Mott said she travels the world to attend horse races but that “the tradition is exceptional here”.

“I love the fashion here, I love the people. I am a royalist and I just love the queen. I waited about an hour and a half to see her yesterday!”

Each race day officially begins with the Royal Procession — the arrival of the queen by horse-drawn carriage — and the raising of the Royal Standard.

For many visitors Ascot is an opportunity to indulge in the lifestyle of Britain’s aristocracy — if only for a day.

Rules of attire vary for each of the three enclosures, with the strictest to be observed at the Royal Enclosure where women must wear hats, dresses must be “modest length, fitting just above the knee”, and men must be in top hats and tails.

The less formal Grandstand stipulates a feather fascinator for women as a minimum requirement in headwear.

Getting it wrong can mean at best embarrassment, at worst the end of the party.

“We don’t get a tape measure out but there are strict rules,” a member of staff policing an entrance to the Royal Enclosure said.

With the focus firmly on headwear, Ladies Day is a chance for milliners like Yuan Li, from China, to get noticed.

Sporting a self-made creation featuring a red oriental-style plume, the London-based designer said: “It’s not every day that people get to wear a hat. It’s a chance to show off who they are.”

On her first visit to Ascot, she added: “I think it will be a great day to understand part of British culture.”