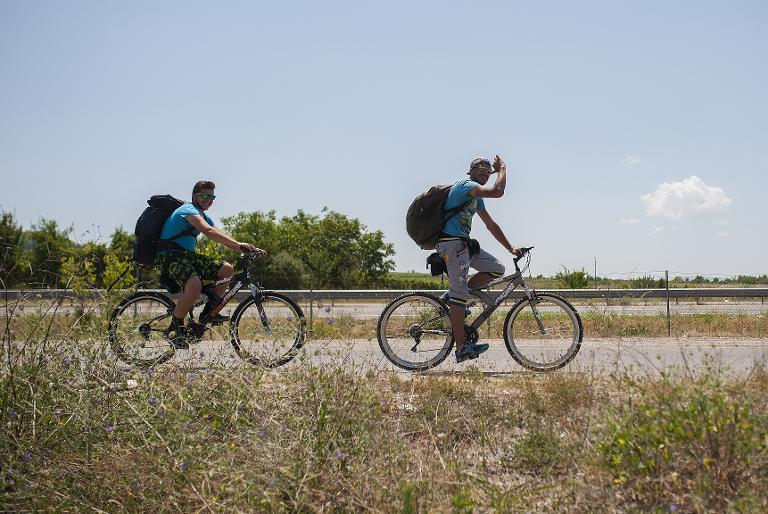 Fleeing their trouble-torn countries in Africa, the Middle East and Asia, streams of EU-bound migrants are driving an unexpected trade in a quiet town in Macedonia — bicycles.

Thousands have arrived in Demir Kapija, a few kilometres (miles) from the Greek border, after journeys by foot, train and boat. But in this picturesque town it is bicycles they seek for the next leg.

The migrants aim to head north across the small, land-locked Balkan state into neighbouring Serbia and finally a European Union country, where they hope to build better lives.

In Macedonia, authorities ban migrants from using public transport but they tolerate walking and cycling — which has seen the price of two-wheelers quickly double in this town of about 3,500 people.

Walid Amoud, a geography professor from Damascus, looked over dozens of bicycles — new and old — lined up outside a small shop in the centre of Demir Kapija before negotiating to buy one for 125 euros ($140).

“I’m travelling with my four daughters, my son and a five-month-old baby,” he told AFP. The family’s dream destination is Germany, which they believe is their best chance for a new start.

Like Amoud, the vast majority of migrants arriving in Macedonia are Syrian, but some hail from Afghanistan or restive African states.

Near the town’s old train station, a group that walked all the way from Thessaloniki on Greece’s Aegean coast, a trek of 130 kilometres (80 miles), rested in the shade.

While Greece is part of the EU, its grave economic crisis has prompted the migrants to try their luck elsewhere.

“We fled death to die on the road. Our situation is getting worse every day,” said 37-year-old Bara, an English language professor from Homs in western Syria, travelling with her four daughters.

The youngest one, a five-year-old brunette with blue eyes, is autistic.

Bara said they had faced little interference from authorities in the areas they crossed — Turkey on foot, the Aegean Sea by boat to Athens, Greece by train to Thessaloniki and then again on foot to Demir Kapija.

“To us everything is forbidden, but nevertheless they let us continue our journey,” she said in tears.

The price of bikes ranges from 120 to 200 euros and acquiring one spares migrants the other option — walking across the country.

A local trader, declining to give his name, told AFP that the price of bicycles had “doubled within a week”.

“One has to live,” he said simply, referring to the ex-Yugoslav state’s own troubles as it faces a political crisis and ethnic tensions involving its Albanian minority.

On Macedonia’s main north-south road, groups of several dozen migrants cycle up the Vardar valley, bearing meagre backpacks with all their belongings.

The route is long and dangerous: in late April, 14 migrants from Somalia and Afghanistan died when they were hit by a passenger train while sitting too close to the tracks.

Once they reach the town of Kumanovo in northern Macedonia, migrants sell their bikes for at most 50 euros — now an unnecessary burden since crossing into Serbia is done secretly in operations negotiated by smugglers.

According to the latest report by EU border agency Frontex, Macedonian smugglers charge between 120 and 200 euros for passage to the Serbian border.

While authorities tend to turn a blind eye to the cyclists and pedestrians, interior ministry spokesman Ivo Kotevski said they were targeting the smugglers since they “earn a lot of money from illegal immigrants”.

Last week police arrested four suspected smugglers and detained 128 migrants hiding in houses in the northern village of Vaksince as they waited to cross the border.

If the migrants make it into Serbia, the country has land access to three members of the 28-nation EU — Croatia, Hungary and Romania.

With the massive flow of people trying to reach Europe, the number entering Hungary shot up from 2,000 in 2012 to 54,000 this year so far, with 95 percent of them arriving from Serbia, according to official figures.

Hungary reacted Wednesday, saying it was building a barrier on its border with Syria to keep them out — triggering “surprise and shock” in Serbia whose prime minister said it “can’t be responsible for the situation created by the migrants”.

The move was announced as Pope Francis hit out at nations that “close the door” to those seeking a safe haven from war, poverty and persecution.

Macedonia’s parliament is due to vote next week on a law that would enable migrants to use public transport legally. Now, “all those whom we detain are expelled to Greece, hundreds every day, but their number is too high,” said spokesman Kotevski.

So for now the migrant continue to cycle, with hundreds every day visible winding their way up the Vardar valley.