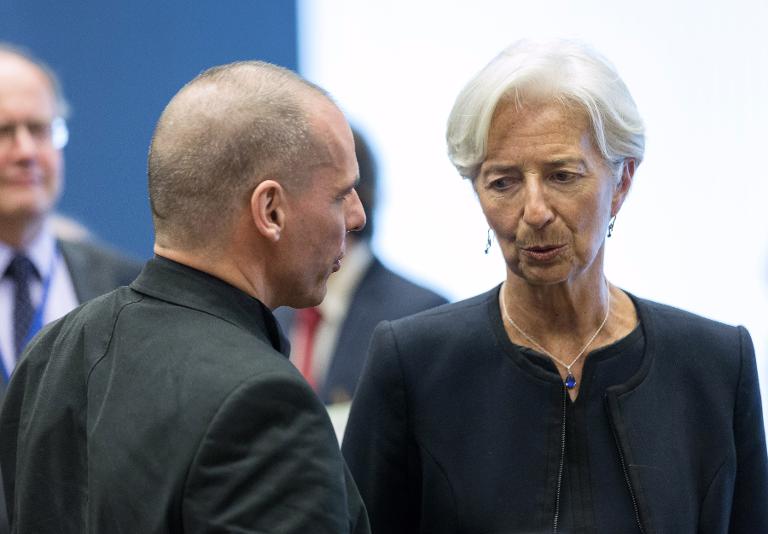 International Monetary Fund chief Christine Lagarde warned Greece Thursday it would get no leeway on a huge debt payment as EU ministers warned they were looking at a “plan B” for a possible default.

Eurozone finance ministers holding a crisis meeting in Luxembourg pressed Athens to finally present a credible reform plan and end the five-month standoff between Greece’s anti-austerity government and its creditors.

But with Athens owing a 1.6-billion-euro payment to the IMF at the end of June and Greece’s international bailout due to expire the same day, they were pessimistic about the chances of a deal on Thursday.

“There will be no period of grace” for the loan payment, Lagarde told reporters before she joined the ministers for their Eurogroup meeting. “I have a term of June 30 — if it’s not paid by July 1, it’s not paid.”

Greece’s creditors are withholding the last 7.2 billion euros of its bailout until Athens caves in, but leftist Prime Minister Alexis Tsipras has refused to make changes to pensions and VAT rates.

Europe’s most powerful leader, German Chancellor Angela Merkel, weighed in on the issue earlier Thursday when she told German lawmakers in the Bundestag she was “still confident” that a deal was possible.

But the mood was darker in an overcast Luxembourg, where ministers were openly broaching scenarios such as a Greek exit from the euro if it defaults on its debts.

“The next step to make the deal credible, also financially sustainable, will have to come from the Greek side,” the Dutch Eurogroup chief Jeroen Dijsselbloem told reporters.

He added that he did “not have a lot of hope” that the Greeks would present a new plan Thursday.

No deal at the Eurogroup meeting means the issue will likely go to the wire at an EU leaders’ summit in Brussels on June 25 and 26.

Greek Finance Minister Yanis Varoufakis, the motorbike-riding former economist whose relations with his counterparts have been strained, said he wanted to “replace costly discord with effective consensus.”

“Today we are going to be presenting the Greek government ideas,” he added, without specifying whether he meant a new reform plan.

Without the bailout tranche and the IMF deadline missed, Greece would be for the first time in five years financially alone, with its coffers empty and all eyes on what happens next.

“The other option is to prepare the B plan,” said Irish finance minister Michael Noonan, adding that he didn’t fear any “contagion effect” in the case of a “Grexit” — meaning Greece crashing out of th euro.

The IMF has taken a harder line than its co-bailout monitors the European Commission and European Central Bank, pushing for Europe to write off some Greek debts.

Greece had already bought itself time by bundling four looming IMF loan payments into one lump sum to be paid by June 30 — becoming the first country to use such a possibility since Zambia in the 1980s — and it is losing patience.

The coincidence that the Eurogroup was meeting on the 200th anniversary of the Battle of Waterloo led EU Economic Affairs Commissioner Pierre Moscovici to draw a comparison between then and now.

“I certainly don’t want this to be a ‘Battle of Waterloo’ with the whole of Europe against one state,” he said.

Greece’s central bank warned for the first time Wednesday that the country could suffer a “painful” exit from the single currency area — and even the European Union — if it fails to reach a deal.

Greece has another 6.7 billion euros due to the European Central Bank in July and August and there have been reports of planning for possible capital controls if Greece’s financial system runs dry.

Elected in January on a vow to end five years of bailout-imposed austerity, Tsipras warned Wednesday that an EU “fixation” with pension cuts would scupper a deal and harm Europe as a whole.

In a move that seemed calculated to irk other European leaders amid tensions with Russia over Ukraine, Tsipras visited Saint Petersburg Thursday where he will be the star guest at President Vladimir Putin’s investment drive forum.