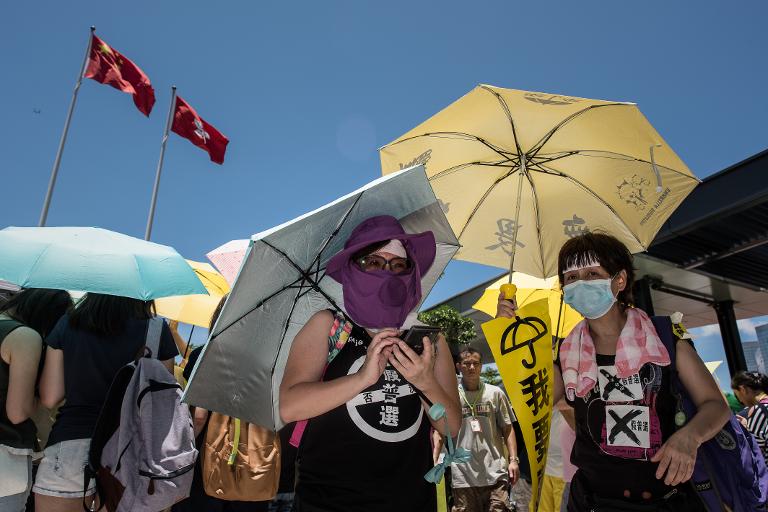 Hong Kong lawmakers on Thursday rejected a Beijing-backed electoral reform package derided as “fake democracy” during mass protests last year, leaving the city in deadlock over how its leader should be chosen.

The government’s electoral roadmap would have given all residents the right to vote for the chief executive for the first time in 2017, but only able to choose from candidates vetted by a Beijing loyalist committee.

In an unprecedented rebuke, the proposal was voted down by 28 votes to eight, with the majority of pro-government lawmakers walking out of the legislative chamber without casting their ballots as defeat loomed.

“This result is not what we want to see,” Beijing’s foreign ministry spokesman Lu Kang said after the vote, which required support from two-thirds of the assembly’s 70 lawmakers to pass.

He added that China wanted to “press ahead with the democratic development of Hong Kong” in the interests of stability and prosperity in the former British colony.

But analysts agreed that Beijing was unlikely to alter its stance on the vetting of candidates, and authorities in Hong Kong have said the political reform debate is now off the table for 2017.

That means the next chief executive will be chosen by a 1,200-strong pro-Beijing committee, as was the unpopular current leader, Leung Chun-ying.

“I, the government and millions of Hong Kong people are naturally disappointed,” Leung said after the vote, accusing the democrats of denying residents the opportunity to choose a leader.

Leung added it was time for the community to “move on” and focus on other issues.

“There is unlikely to be a new (reform) proposal from China’s government,” he said.

Pro-democracy lawmakers did not cast their defeat of the vote as a victory, with some saying that it was just the beginning of a long battle.

“I think in the short-term we cannot see any opportunity or incentive for them to sit together and start up another round of negotiations,” said Ivan Choy, a senior lecturer at the Chinese University of Hong Kong.

“Political reform may be in a deadlock for two or three years.”

Hong Kong is largely self-governing after being handed back to China by Britain in 1997 and enjoys much greater freedoms than on the mainland, but there are fears that these are being eroded.

Analysts say that despite Thursday’s vote, the pro-democracy campaign risks fragmenting as frustrations grow over the lack of progress, and that smaller radical splinter groups could emerge.

Beijing has not made it clear how it will respond to what was a slap in the face for the mainland authorities.

China’s top legislature emphasised that the issue was non-negotiable, saying its decision last August to insist on the vetting of candidates will remain in force in the future, state media reported.

“The decision shall continue to serve as the constitutional ground for Hong Kong in the future as it enforces universal suffrage in the chief executive election,” Xinhua reported, citing a statement from the National People’s Congress Standing Committee (NPC).

Some analysts said China may take a harder line against Hong Kong, but given its importance as a finance hub, Beijing is likely to avoid any measures that could dent its economic prosperity.

“Possibly China will draw some lessons from this, and make some changes in its Hong Kong policy. Some matters may be treated more harshly. It’s hard to say,” said Shi.

Around 100 pro-democracy supporters outside the legislature cheered at the vote Thursday, punching the air and hugging each other as the result was broadcast live on a big screen.

“I’m excited!” said 30-year-old IT worker Ken Tsang. “It was a proposal that would only benefit those in power.”

Hundreds of pro-government supporters, who had gathered at the harbourfront assembly, shouted through loudspeakers to “vote out” the democrats.

“I’m very disappointed that I cannot have my vote (for leader),” said Leung Ting-to, 63, who was standing with the pro-Beijing camp.

“Hong Kong… was given the chance to have universal suffrage, but the democrats took it away.”

Civic Party leader Alan Leong, part of the pro-democracy camp, said that it would “go down in history” that only eight people supported the bill.

“The message that we are sending to the central people’s government and the Hong Kong government is that Hong Kong people do not want to take on this fake democratic package,” he said.