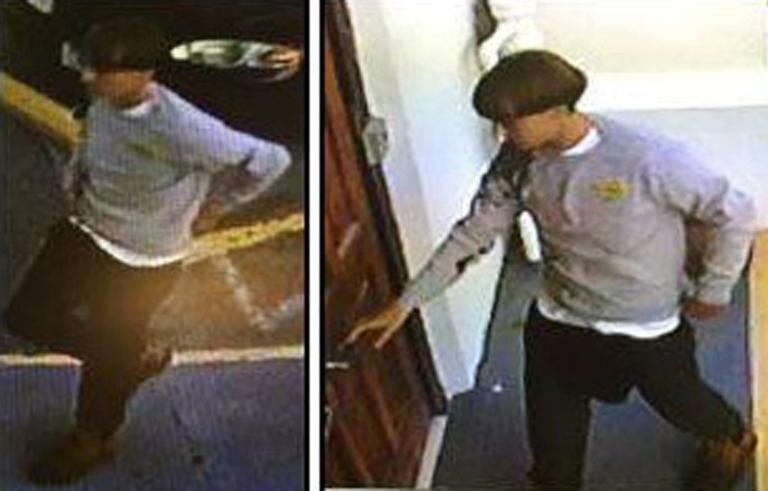 US police on Thursday hunted for a white gunman who killed nine people at a prayer meeting in one of the nation’s oldest black churches in Charleston, as federal authorities opened a hate crimes probe.

The shooting at the Emanuel African Methodist Episcopal Church in the southeastern US city was one of the worst attacks on a place of worship in the country in recent years, and comes at a time of lingering racial tensions.

Churchgoers had gathered Wednesday evening when the shooter walked into the building, sat in the congregation for about an hour and then opened fire, Charleston Police Chief Gregory Mullen said.

Three men and six women were killed, and several other people were wounded. Among the dead was the church’s pastor Clementa Pinckney, who was also a South Carolina state senator.

“At this point, we have nine victims in this hideous crime that has been committed,” Mullen told journalists.

“I do believe it was a hate crime.”

Police released photos of the suspect — a slender white man believed to be in his 20s with dark blond or brown hair in a distinctive bowl-type haircut and wearing a grey sweater. He was seen leaving the scene in a black sedan.

Helicopters and sniffer dogs were deployed in the hunt for the suspect.

The shooting comes at a time of heightened racial tensions in America, after several high-profile killings of unarmed black men at the hands of white police in recent months led to protests and a national debate on race.

A Justice Department spokesperson said a hate crimes probe had been opened, with FBI agents working in tandem in with local police.

Jim Curley, owner of AC’s Bar & Grill, which is located a few blocks from the church, said locals were shocked anyone would carry out an attack in the popular tourist area.

“This is absolutely bizarre,” Curley told AFP. “This is really completely out of the blue… We have no idea what the motivation is.”

Officers investigated a possible bomb threat after the shooting, but several hours later gave the all-clear.

The incident once again highlights broad racial tensions that persist in many US communities, more than five decades after the Civil Rights Act was enacted to outlaw racial and other forms of discrimination.

In April, in the neighboring city of North Charleston, a white police officer was charged after a video surfaced of him fatally shooting a fleeing black man in the back during a traffic stop.

But Curley said the neighborhood’s residents typically get along fine.

“Generally, there’s not a great deal of racial tension,” he said.

Charleston is known locally as “The Holy City,” due to its large number of churches and historical mix of immigrant ethnic groups that brought a variety of creeds to the city on the Atlantic coast.

“People in prayer on a Wednesday evening. A ritual coming together, praying and worshipping God. To have an awful person come in and shoot them is, is inexplicable,” Mayor Joseph Riley said.

Dot Scott, the head of the local chapter of the National Association for the Advancement of Colored People (NAACP), said the shooter may not have drawn attention because of the church’s location.

“It sits in an area that a lot of the tourists frequent. It’s not out of the ordinary that folks just walk into the sanctuary and sit and listen to what’s going on,” Scott told CNN.

Officials did not immediately release the names or any details of the victims, or say what kind of gun was used.

According to its website, the Emanuel African Methodist Episcopal Church is the oldest such church in America’s southern states.

The church was founded in 1816 and in 1822 was investigated for its involvement with a planned slave revolt, the website states.

“The only reason someone can walk into church and shoot people praying is out of hate,” mayor Riley said. “It is the most dastardly act that one can possibly imagine.”

Republican presidential candidate Jeb Bush canceled campaign events that had been planned for Thursday in Charleston.

Democratic presidential candidate Hillary Clinton, who had been in Charleston earlier Wednesday, tweeted her condolences.

“Heartbreaking news from Charleston – my thoughts and prayers are with you all,” she wrote.

The Charleston shooting is the latest on a long list of mass shootings in the United States.

The deadliest in recent years include the April 2007 Virginia Tech shooting, when 32 were killed, and the December 2012 Sandy Hook elementary school shootings in Newtown, Connecticut, when a total of 27 people died, including 20 children.

Charleston is famous for its cobblestone streets, Southern cuisine and nearby beaches and islands. The city is also known outside the United States for its namesake 1920s dance.