Home Science & Tech Get your hands on worldâ€™s slimmest smartphone at Rs 17,999 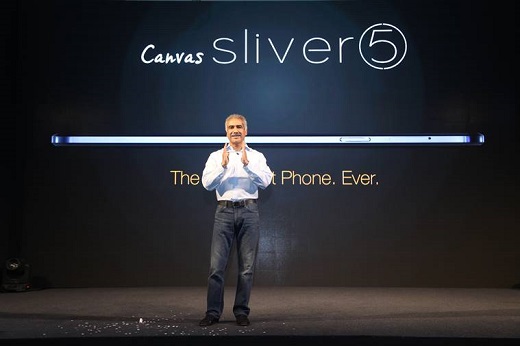 Micromaxâ€™s Canvas Sliver 5 is the slimmest phone ever. At a mere 5.1 mm thickness, excluding any camera bumps on the rear side, the Sliver 5 sure is a head turner.

The phone is not just slim but itâ€™s also light at just 97 grams. The metallic frame with the double layer of bright aluminium coating, adds a touch of class to this slim phone.

Australian actor Hugh Jackman has been roped in to endorse the phone. The Hollywood star will soon be seen in a high-end commercial for the Canvas Series, taking ahead Micromaxâ€™s promise of â€˜Nothing like Anythingâ€™ experience.

On the storage front, the phone offers 16GB out of which only 11.4GB is available to the user. However, there is no provision for additional micro SD card.

Canvas Sliver 5 sports an 8MP rear camera with a Sony IMX219 stacked CMOS sensor. On the front, there is a 5MP camera which also has access to the professional mode features.

The Canvas Silver 5 is packed with a 2000mAh lithium polymer battery which according to Micromax offers a 1 day battery life on regular use case.

The device, priced at Rs 17,999, comes with a free 4G SIM and double data offer from Airtel which doubles the 4G data amount for any consumer activating the 4G SIM.

Micromax Canvas Silver 5 will be available from June end across India.