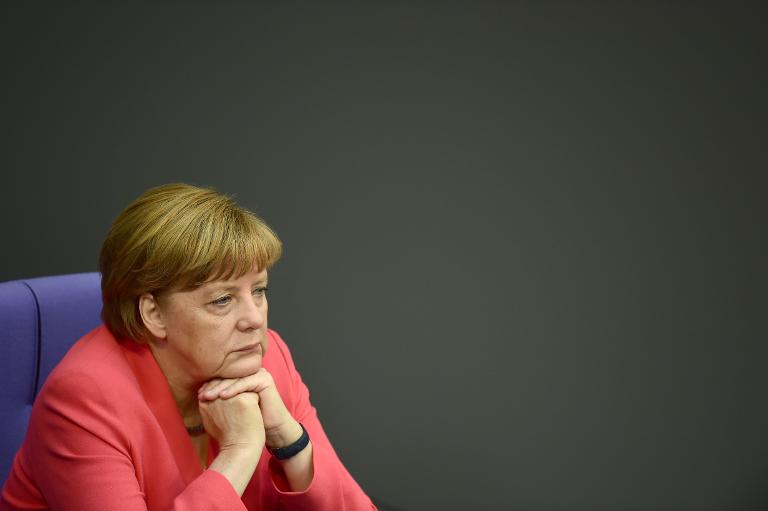 German Chancellor Angela Merkel said Thursday she was “still convinced” a Greek debt deal was possible ahead of crunch EU talks on keeping Athens from crashing out of the euro.

With eurozone finance ministers holding out little hope of an agreement as they gathered in Luxembourg, Merkel insisted that she wanted to keep Greece in the single currency.

The crisis is nearing a climax with Greece’s international bailout about to expire on June 30 before Athens gets the last 7.2-billion-euro ($8.1 billion) tranche, which it needs to pay a huge IMF bill on the same day.

“I am still convinced — where there’s a will, there’s a way. If the political leaders in Greece demonstrate this will, then a deal with the three institutions is still possible,” Merkel told the Bundestag lower house of parliament.

“It remains the case that Germany’s efforts are aimed at keeping Greece in the eurozone.”

Greece’s central bank warned for the first time Wednesday that the country could suffer a “painful” exit from the single currency area — and even the European Union — if it fails to reach a deal.

And in a sign the EU’s top financial brass are also seriously considering the possibility of a “Grexit”, the head of Germany’s central bank, Jens Weidmann, said it would “change the character of the monetary union” — but not destroy it.

– ‘Battling for the eurozone’ –

Creditors are withholding the last part of the bailout until Athens comes up with further reforms, but anti-austerity Prime Minister Alexis Tsipras has refused to make changes to pensions and VAT rates.

Thousands of protesters rallied in Athens on Wednesday night to protest against the demands for further cuts, and polls show most Greeks support the government, though its ratings are falling.

Despite the warnings, Greek Finance Minister Yanis Varoufakis said he does not expect the reforms-for-cash standoff to be resolved at Thursday’s talks.

“I don’t think so,” he said when asked during a trip to Paris on Wednesday if he expected an agreement. “Now it is up to political leaders to arrive at an accord.”

EU leaders meet next Thursday and Friday at a summit likely to be dominated by the Greek crisis.

With Europe on Thursday marking the 200th anniversary of the Battle of Waterloo when French emperor Napoleon was defeated by allied forces, French EU Economic Affairs Commissioner Pierre Moscovici said he wanted to avoid modern-day hostilities.

“I certainly don’t want this to be a ‘Battle of Waterloo’ with the whole of Europe against one state,” he said as he arrived in Luxembourg.

“We are fighting for the integrity and irreversibility of the eurozone.”

Austrian Finance Minister Hans Joerg Schelling said they were not optimistic that Greece would bring a new plan to the table.

“We hope so. I don’t think it is likely,” he told reporters.

Underscoring growing global concern about the fallout from the crisis, US Federal Reserve Chair Janet Yellen warned the world economy could see significant “disruptions” if Greece and its creditors failed to reach a deal.

Greece is due to pay the International Monetary Fund 1.6 billion euros by June 30 after bundling several payments due this month together, with another 6.7 billion euros due to the European Central Bank in July and August.

Elected in January on a vow to end five years of bailout-imposed austerity, Tsipras warned Wednesday that an EU “fixation” with pension cuts would scupper a deal and harm Europe as a whole.

The mounting pressure has frayed tempers, illustrated by the public falling out between Tsipras and European Commission chief Jean-Claude Juncker, who has accused the Greek premier of misleading Greek voters about the negotiations.

Juncker and Tsipras spoke by telephone on Wednesday for the first time since talks between Greece and its creditors in Brussels broke down on Sunday.

The strategic implications of a Greek euro or EU exit have weighed heavily on European calculations, amid fears that Russia could increase its leverage in southern Europe.

Tsipras visits Saint Petersburg on Friday as a star guest at President Vladimir Putin’s investment drive forum, despite the fact that the EU has just agreed to renew economic sanctions against Russia over the crisis in Ukraine.