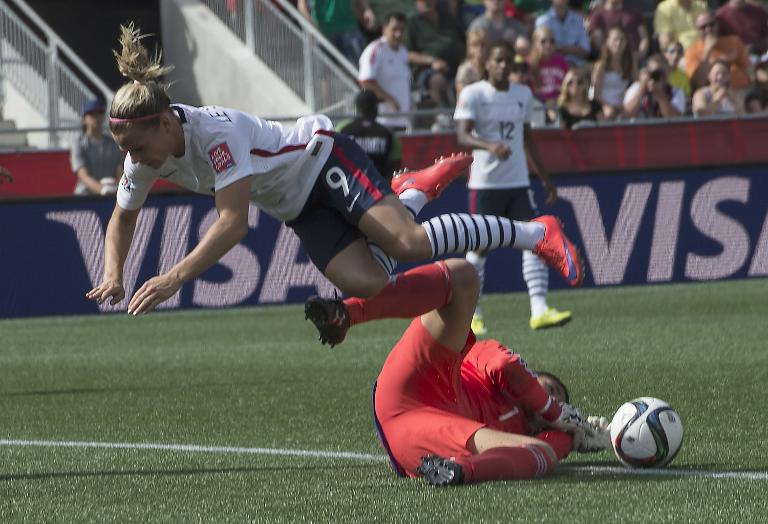 France got their Women’s World Cup campaign back on track Wednesday with a 5-0 rout of Mexico as England, South Korea and Colombia also grabbed last 16 berths on the final day of group games.

The third-ranked French had been among the tournament favourites before falling to a shock 2-0 defeat to Colombia in their second game.

But they delivered in style in their third match, becoming the quickest team to score three goals in the tournament’s history to finish top of Group F.

England, also on six points, but behind France on goal difference, beat Colombia 2-1 in Montreal and advance second from the group.

The 28th-ranked South Americans also backed into the last 16 as one of the four best third-place finishers with four points.

Mexico, ranked 15th, are on their way home with one point.

France’s Marie Laure Delie scored after just 34 seconds in Ottawa, with an own goal by defender Jennifer Ruiz eight minutes later followed by the first of a Eugenie Le Sommer double on 13 minutes.

Le Sommer scored her third of the tournament on 36 minutes, with Amandine Henry completing the scoreline with a spectacular goal from 25 yards out with ten minutes to go.

France next meet South Korea, who came from behind to dump Spain 2-1 in Group E and achieve their first win in the tournament on their second attempt after 2003.

“I felt like we had won the title,” said Kim Soo-Yun who scored the winner on 78 minutes after Cho So-Hyun (53) cancelled out a 29th-minute Veronica Boquete strike. “I was so pleased, so happy, this is my first time making it to the senior World Cup.”

Brazil finished top of Group E with a 1-0 victory over Costa Rica which sent the Central American side crashing out of the tournament.

The 2007 runners-up have a maximum nine points ahead of South Korea on four. Costa Rica finish on two and Spain with one — with both sides eliminated from the tournament.

England finished second in Group F, by beating Colombia 2-1 to set up a meeting with 1995 champions Norway on Monday.

Goals from Karen Carney (15) and a Fara Williams (38) penalty kick, put England ahead before Lady Andrade snatched one back in injury time.

Colombia qualified with four points and next play two-time winners the United States in the knockout round.

Brazil, already through, kept their unbeaten record with the win over Costa Rica, courtesy of a Raquel Fernandes goal seven minutes from time.

The 2007 runners-up play Australia in the last 16 at Moncton on Sunday.

The knockout rounds get underway on Saturday with two-time winners Germany up against Sweden, the 2003 runners-up, at Ottawa, and China taking on surprise African newcomers Cameroon at Edmonton.