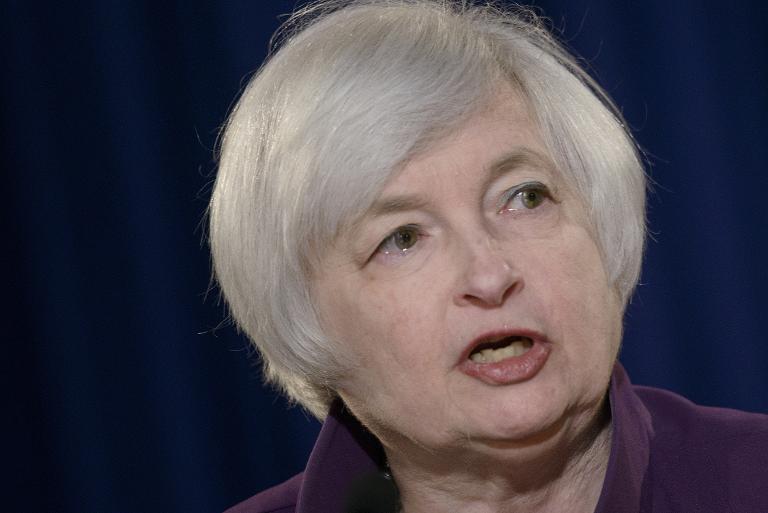 The Federal Reserve left its benchmark interest rate unchanged at near zero Wednesday, but Chair Janet Yellen said the first hike in nine years would likely come “later this year”.

After a two-day policy meeting, the US central bank’s Federal Open Market Committee again demurred on an increase in the federal funds rate, even as the FOMC saw the economy rebounding from the contraction in the first quarter.

But Yellen said the economy still has some weak points and the FOMC needs to see more evidence of improvement before embarking on what she stressed would be a series of “gradual” rate increases.

“Room for further improvement remains,” she said in a post-meeting news conference.

“My colleagues and I would like to see more decisive evidence that a moderate pace of economic growth will be sustained, so the conditions in the labor market will continue to improve and inflation will move back to two percent,” she said.

After the surprise winter stall, the Fed described US economic growth as back to a “moderate” pace during the past two months.

It trimmed its 2015 gross domestic product growth forecast to 1.8-2.0 percent, sharply down from March’s outlook, to account for the setback in the first quarter.

But the policy makers expect growth to pick up modestly to a 2.4-2.7 percent pace next year and the unemployment rate — a key referent for monetary policy — to slip slowly from the current 5.5 percent to as low as 5.2 percent by year-end and 4.9 percent in 2016.

Along with an expected rebound in inflation, Yellen said this would warrant an initial tightening of monetary policy before the end of the year.

The fed funds rate has been locked at the zero level since the 2008 financial crisis, in an extraordinary effort to stimulate growth with easy money.

Predictions made by the individual FOMC participants indicated most expect the rate to rise above 0.5 percent by December. That likely signals two 0.25 percentage point increases from September, most analysts said.

“Based on this assessment of the economy, Fed officials expect the benchmark federal funds rate to end the year at 0.625 percent, the same as before, and consistent with two rate hikes later this year,” said Nariman Behravesh, chief economist at IHS.

Even so, analysts said the FOMC betrayed a somewhat surprising dovish turn, after top officials including Yellen had appeared eager in recent weeks about moving to the initial “liftoff” toward a normalized monetary policy.

Yellen said there were still signs of cyclical weakness in the economy, especially in the labor market.

And while not making a link to monetary policy, she voiced concerns about the fallout if Greece and its creditors cannot reach a deal on more bailout funding for Athens.

“This is a very difficult situation. In the event that there is not agreement I do see the potential for disruptions that could affect the European economic outlook and global financial markets,” she said.

The dovishness was clear in the shift in the FOMC members’ rate forecasts for the end of 2016. In March the median prediction was 1.875 percent. Wednesday’s median for December 2016 was 1.625 percent, a much gentler curve.

As a result, US stocks rose, with the S&P 500 swinging from losses to end up 0.2 percent, and the dollar fell 0.8 percent against the euro.

The prospect of a rise in US interest rates has sparked turmoil in global markets for two years, with volatile currencies and capital flows challenging policy in many emerging-market countries.

Amid worries about more volatility, Yellen sought to downplay the importance of the first rate hike.

“The timing of a first decision to raise rates is something that should not be overblown, whether it is September or December or March.”