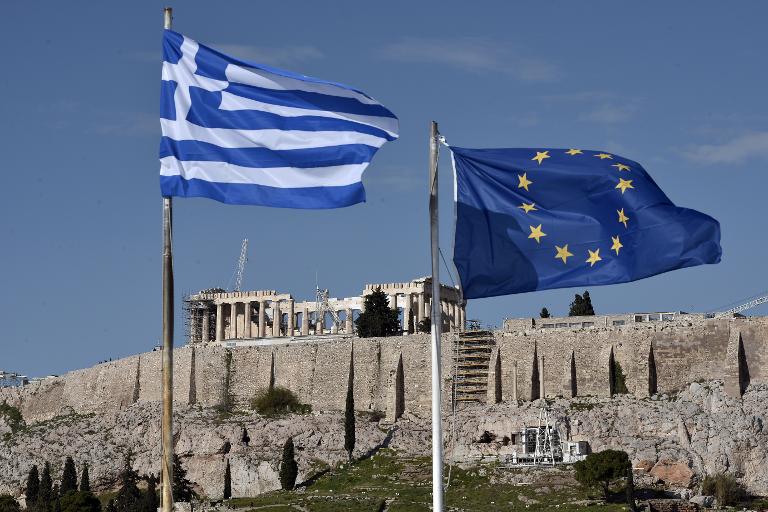 Europe’s main stock markets fell on Thursday ahead of crunch Eurogroup talks on Greece, as hopes faded of a deal between Athens and its creditors over bailout repayments, dealers said.

The Greek ATHEX index, however, rebounded from an early 2.48 percent drop to trade 0.43 percent higher at 683.78 points.

In foreign exchange trade, the euro hit a one-month peak of $1.1420 with the dollar after the Federal Reserve said any rises in US interest rates would be slow, before easing slightly to $1.1411.

Eurozone finance ministers were set to hold a meeting on Greece in Luxembourg after a barrage of warnings that the country risks a damaging exit from the euro if it fails to strike a deal with creditors to free up 7.2 billion euros ($8.1 billion) in blocked bailout funds.

Cash-strapped Athens badly needs the aid to honour loan repayments to the International Monetary Fund by the end of June.

“The lack of progress in the negotiations significantly increases the probability of Greece not making the 1.5-billion-euro IMF payment due at the end of June.”

Iscaro added that “even if a technical default is not triggered yet, not paying the IMF would inevitably send shockwaves, not only in Greece, but also across the eurozone.”

As negotiations between Athens, the EU, the IMF and the European Central Bank over the last tranche of Greece’s massive international bailout grew increasingly acrimonious this week, officials have started openly discussing the prospect of Greece crashing out of the euro.

On Wednesday, a day ahead of the meeting of the eurozone’s 19 countries, Greece’s central bank warned for the first time that the country could suffer a “painful” exit from the single currency area — and even the European Union — if it fails to reach a deal.

“The Eurogroup meeting today will probably conclude with no deal between Greece and its creditors,” added Societe Generale analysts in a research note to clients.

“All eyes are now on the 25/26 June summit, although press reports indicate that an extraordinary gathering could take place over the weekend.”

But Oanda senior market analyst Craig Erlam warned the lack of progress after so many months of wrangling already “raises serious doubts that a deal will be able to be agreed in time for Greece to receive the funds by the end of the month when it needs to repay â‚¬1.5 billion to the IMF and pay â‚¬1.6 billion in pensions and public sector wages.”

Higher gasoline prices lifted the consumer price index by 0.4 percent in May, while US jobless claims dropped 12,000 to 267,000 in the week ending June 13, data showed.

In Asia on Thursday, equities headed lower after the Federal Reserve said any rises in US interest rates would be slow, while Chinese stocks tumbled on liquidity concerns.

Shanghai tumbled 3.67 percent on liquidity fears as several new firms prepare to list while profit-takers also moved in after a surge in the index over the past year that has seen it pile on about 140 percent.