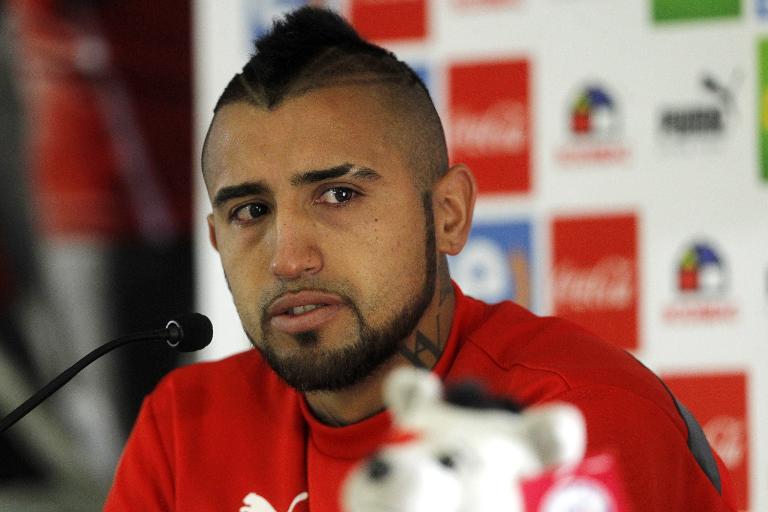 Chilean football star Arturo Vidal made a tearful apology Wednesday after he saw his driver’s license suspended for crashing his Ferrari while driving under the influence, but he remained on the national team.

After spending the night in jail, the Juventus midfielder appeared in court in Santiago, where the judge freed him from custody but suspended his license and ordered him to report to the Chilean consulate in Milan every month under the terms of his release.

Vidal, who is home from Italy playing with the Chilean national team in the Copa America, collided with another car late Tuesday as he and his wife, Maria Teresa Matus, returned from a night out at a casino.

The accident has upended the South American championship in Chile, where the host nation’s fans have pinned their hopes on Vidal to help bring them their first-ever continental title.

Vidal, who is the leading scorer in the tournament, was briefly taken to hospital along with his wife following the accident, then carted off to jail in the back of a police car.

Officials have not disclosed how much alcohol the 28-year-old star had in his blood.

The accident left his red Ferrari badly mangled on the driver’s side, its airbags deployed.

After his court appearance Wednesday morning, Vidal rushed off to Chile’s training camp, where he tearfully took responsibility for the accident and apologized to his team and the country.

“I let everyone down,” he said.

“I want to tell you what happened. Yesterday I went to the casino. I had two drinks,” he told journalists, struggling to get his words out.

“I put my wife’s life at risk, a lot of people’s lives at risk. I’m very sorry.”

Vidal does not face jail time because only he and his wife were hurt. He suffered “minor injuries” and his wife has “moderately serious injuries,” police Colonel Ricardo Gonzalez told reporters.

Chile has a zero tolerance law on drunk driving. On Wednesday the court took Vidalâ€™s license away pending further investigation. If convicted, his license could be suspended for up to two years.

The tone of Vidal’s apology was markedly different from a YouTube video he posted proclaiming his innocence after the accident.

“It was not my fault,” he said in the recording, thanking his supporters and giving a thumbs up.

“Go ahead and handcuff me, but you’re going to shit all over Chile,” he said.

After a night of hand-wringing for Chilean fans, coach Jorge Sampaoli said he would not suspend the star.

“He’s just arrived and we’re going to see how he is and try to make him understand that he maybe made a mistake, which for us is not so decisive that we need to suspend him,” he said.

He said Vidal has always shown “very good behavior” under his watch, despite his previous brushes with controversy.

“This accident of Arturo’s is not going to affect Chile because he’s a player who is with the team, beyond any mistake,” he said.

“I back you and send you all my support as always. The most important thing is that you and your family and the other people are fine. I love you,” the Arsenal star wrote on Twitter.

– Fireworks on and off pitch –

Vidal, whose tough style of play has earned him the nickname “The Warrior” at Juventus, is no stranger to controversy.

In 2011, he was among five players excluded from Chile’s squad preparing for World Cup qualifiers after they turned up for training late and drunk.

He was welcomed back to the fold after apologizing.

This season, Juventus imposed a club record $112,000 fine after Vidal was allegedly involved in a drunken brawl outside a Turin nightclub.

In the Copa America, he has scored three times in two matches.

He hit a penalty in Chile’s opening victory against Ecuador and two more goals in Monday’s 3-3 draw with Mexico in Santiago — just 24 hours before his accident.

Chile are at the top of Group A and meet Bolivia in their final first-round match on Friday.