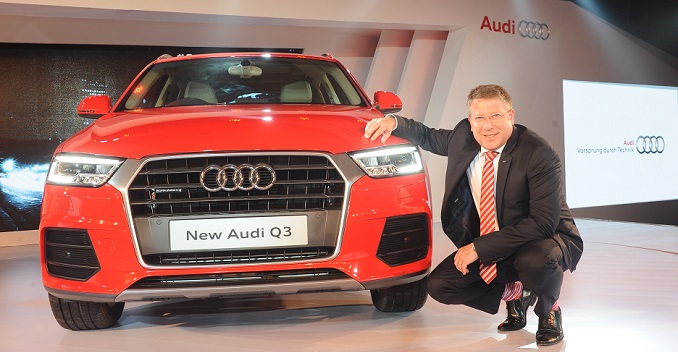 New Delhi: German luxury car maker Audi on Thursday launched an all-new version of its popular SUV Q3 priced between Rs 28.99 lakh and Rs 37.50 lakh (ex-showroom Delhi) as it tries to scale up in the Indian premium vehicle market.

The new Q3, powered by a 1968 cc diesel engine, is the fourth of five vehicles Audi India plans to launch in five months.

The vehicle will be available in three variants with the base variant priced at Rs 28.99 lakh, the mid version at Rs 33.99 lakh and top end at Rs 37.50 lakh (ex-showroom Delhi).

â€œWe are confident that the new Q3 will bring in many new members to the Audi family much like it did since its launch and will further strengthen our dominance in compact luxury segment in India,â€ Audi India Head Joe King said.

While the top-end price of the new Q3 has gone down Rs 1.09 lakh, the base variant price has moved up Rs 1.16 lakh compared with the earlier version. The mid variant has become costlier by Rs 1.49 lakh.

Launched in a total of 4 variants, the vehicle comes with 2 transmission options â€“ a 6-speed manual and a 7-speed S-tronic automatic gearbox. Power for the updated Audi Q3 comes from the same 2.0-litre, 4-cylinder TDI diesel unit that did duty on the old model. This engine is good for 177bhp and 380Nm of maximum torque.

The new Audi Q3 is the fifth vehicle car to be launched in India by the company this year after the Audi R8LMX, the new Audi TT Coupe, the new Audi RS 7 Sportback and RS 6 Avant.

Audi plans to launch a total of 10 products in India this year as it looks to fend off stiff competition from rival Mercedes-Benz.

The company, which sells various popular brands including A3 sedan and Q5 sports utility vehicle, was overtaken by Mercedes-Benz in January-March this year. While Audi posted a growth of 15% in the March quarter at 3,139 units, Mercedes-Benz sold 3,566 units, up 40%, from the year-ago period.