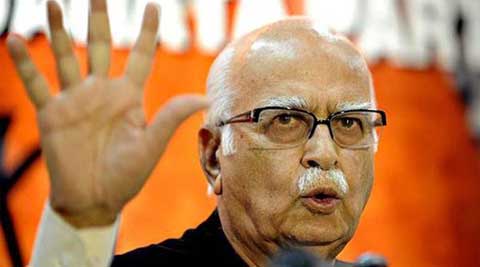 New Delhi: BJP patriarch L K Advani’s statement that “forces that can crush democracy are stronger” created a buzz in political circles leading to speculation that it was a barb aimed at Prime Minister Narendra Modi but RSS dismissed it while Congress and other BJP rivals shared his concern.

Delhi chief minister Arvind Kejriwal came out to support Advani’s statement in which he had not ruled out an Emergency- like situation in the country again.

“Advani ji is correct in saying that Emergency can’t be ruled out. Is Delhi their first experiment,” Kejriwal asked in a tweet.
AAP leader Ashutosh was also quick to react and said that the BJP patron’s statement Â was indicative of his dissatisfaction with the current leadership of the party, and added that they feel that the veteran fears that the country is being pushed towards an Emergency-like situation.

Bihar Chief Minister Nitish Kumar also came out in support and said that Bihar was “facing it on a daily basis”.

“Advani is among the senior-most leaders of BJP and his concerns should be considered seriously. As far as Emergency- like situation is concerned, we are facing it here on a daily basis,”Â Kumar said.

Congress spokesperson Tom Vadakkan latched on to Advani’s remarks saying the “jury is out” from the ruling party itself and he was indeed hinting at “emergency-like” situation under Modi’s rule.

“Today the jury is out. Advaniji is vocal. What he had to say, he has said,” he told reporters.

JD(U) leader KC Tyagi, who was also imprisoned with Advani during the Emergency, said “I agree with Adavani ji that circumstances like emergency and context are still alive and the reasons lead to emergency are not finished yet.”

Advani had earlier in an interview to an English daily said that he did not see any sign in India’s polity that assured him of any outstanding aspect of leadership, adding that he did not have the confidence that a situation like the Emergency would not be repeated in the country.
Â