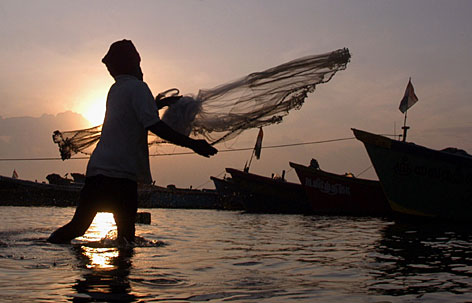 Karachi: There might be a war of words ensuing permanently between the arch rivals up in arms, but thereâ€™s some good gesture from Pakistanâ€™s side, finally.

As a Ramadan gift, PakistanÂ on ThursdayÂ released 113 Indian fishermen lodged in a jail in Karachi, days after Prime Minister Narendra Modi called up his Pakistani counterpart Nawaz Sharif to greet him on the holy month of Ramzan.

“We have got orders from Islamabad that the fishermen have been released from Malir jail as a goodwill gesture on the occasion of the holy month of Ramzan,” deputy jail superintendent Muhammad Hussain Sehto said. The 113 Indian fishermen will travel to Lahore by Karakoram Express and will be handed over to Indian authorities at the Wagah borderÂ on Friday.

On their release, Pakistan Fisherfolk Forum (PFF) and jail authorities presented the traditional gift of Ajrak (blockprinted shawls) to the fishermen. The Indian fishermen were released after Modi on June 16 called up Sharif to wish him on the occasion of Ramzan and stressed the need for having “peaceful” and “friendly” bilateral ties.

In his telephonic conversation, Modi also conveyed to Sharif India’s decision to release detained Pakistani fishermen on the occasion of Ramzan, a move seen as a bid to lower tensions between the two countries. Pakistan and India have been involved in a war of words recently with leaders from both sides exchanging sharp comments after Modi’s critical remarks about Pakistan during his Dhaka visit and in the wake of India’s military action in Myanmar.

India and Pakistan regularly arrest fishermen who venture into unmarked territorial waters of the two countries. Last February, around 172 Indian fishermen were released from Malir jail.