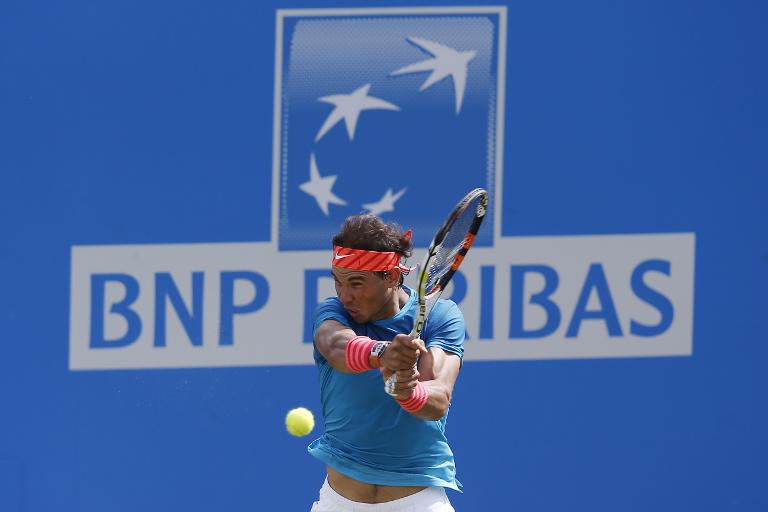 Rafael Nadal suffered a shock first-round exit from the Wimbledon warm-up event at Queen’s Club as the Spanish star was beaten 6-3, 6-7 (6/8), 6-4 by unheralded Ukrainian Alexandr Dolgopolov on Tuesday.

Nadal’s dismal defeat against the world number 79 is the latest in a growing list of lacklustre performances in a troubled 2015 campaign for the former world number one.

The 14-time Grand Slam winner was beaten at the French Open for only the second time in his glittering career when Novak Djokovic won their quarter-final clash in Paris.

As a result, Nadal’s ranking has plunged to 10th — his lowest position for a decade — and to add insult to injury he will now head to Wimbledon, which gets underway later this month, with renewed questions about a decline that hit another low with this setback in west London.

Nadal tried to downplay the significance of the result, saying: “It’s a loss. I didn’t play bad at all and fought until the end. Games on grass are like this.

“I played an uncomfortable player. Sometimes just a few things decide matches here and I wasn’t lucky enough today. I probably didn’t play aggressive enough when I had the break in the third set.”

Dolgopolov added: “It’s as good as I’ve played on grass. I like to frustrate opponents and make it uncomfortable for them.”

Nadal, back at Queen’s for the first time in four years, wasn’t expected to have any problems with Dolgopolov after the confidence booster of winning the grass-court tournament in Stuttgart last week — his first title on the surface since lifting the Wimbledon crown five years ago.

But Dolgopolov had won his last meeting with Nadal — at Indian Wells last year — and dominated from the baseline as he took the first set.

In a dramatic second set tie-break, Nadal saved a Dolgopolov match point with a nerveless serve and went on to level the match.

Nadal looked in control after breaking in the third game of the final set, but he let the momentum, and a 4-2 lead, slip away after being given a warning for a time violation.

Three-time Queen’s champion Andy Murray had no such problems as he saw off Taiwanese qualifier Lu Yen-Hsun 6-4, 7-5.

The 28-year-old top seed is coming off the best clay-court campaign of his career after taking titles in Madrid and Munich before pushing Djokovic to five sets in the French Open semi-finals.

He was never at his best against Lu, but the former Wimbledon winner had enough guile to eventually subdue the 31-year-old world number 63 and set up a second-round clash with Spain’s Fernando Verdasco.

“I felt like I moved pretty well. I didn’t start serving so well, but I hit the ball well from the back of the court,” Murray said.

“I’ve had good runs here. It’s an extremely strong field this year so I’ll have to play great tennis.”

The Swiss second seed swept through his first-round clash in just 49 minutes to set up a second-round meeting with big-serving South African Kevin Anderson.

Kokkinakis’s victory completed an emotional period for the 19-year-old, who has spent most of the last three days in the air after flying to Adelaide to be with his ill grandmother and then dashing back to Queen’s after accepting a wildcard entry.

“She’s struggling. But she’s all right. She’s old. It happens,” he said.

“I’ve spent something like 48 hours flying in three days. I’m a little bit tired, but I slept long enough and I’m happy with my decision.”