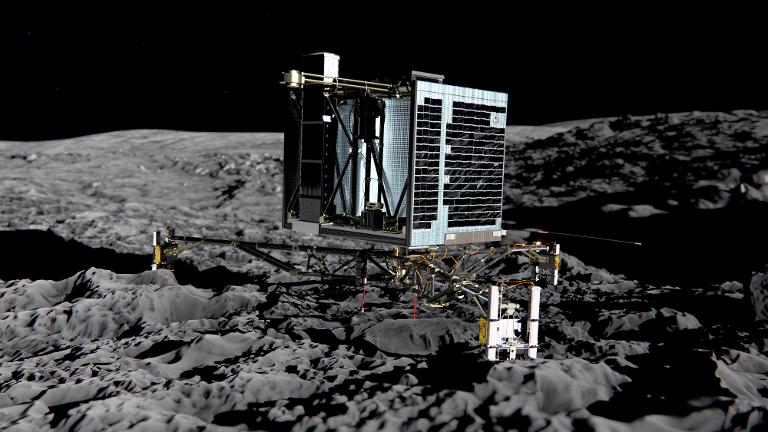 Space scientists on Wednesday unveiled their plan to put the revived robot lab Philae back to work with experiments to monitor, sniff and prod a comet hurtling toward the Sun.

The lander, which sent home its first word Saturday after seven months of hibernation, will go through a rigorous checkup before being told to resume imaging, sampling and finally drilling into its frozen host.

“The rationale should be to… start by the less risky to go to the most risky” experiments, Philippe Gaudon of France’s CNES space agency told journalists at the Paris Air show.

Philae touched down on comet 67P/Churyumov-Gerasimenko on November 12 last year after a 10-year journey piggybacking on mothership Rosetta, now orbiting the space rock.

The landing was bumpy — the tiny lab bounced several times on the craggy surface before ending up in deep shade, deprived of sunlight to replenish its battery.

Philae had enough onboard power to send home data from about 60 hours of tests conducted with eight of its 10 instruments, before going into standby mode on November 15.

The washing machine-sized lander’s power pack is being recharged as 67P streaks toward the Sun at about 31 kilometres (19 miles) per second.

There has been no followup contact, but the teams say this was expected.

“We have much more data still waiting for us in the mass memory… so hopefully with the next communication we will get more data,” Barbara Cozzoni, an engineer with the German Aerospace Centre (DLR), told the briefing.

Information received so far is exclusively about Philae’s state of health and is “only good news,” she said.

“The lander internal temperature is very good, the lander is warm… Our solar panels are collecting energy… they are performing as expected.”

As for future experiments, Gaudon said the first — hopefully within days — would see deployment of the Romap magnetic field analyser, the Mupus temperature gauge and Sesame, which measures the comet’s surface using sound waves.

These instruments “are small consumers, only a few watts and they don’t require movement,” he explained.

Any motion could dislodge the lander, perched precariously at an angle against a rocky outcrop, with only two of its three feet touching the surface.

The following round would likely involve high-resolution cameras, Civa and Rolis, then Philae’s Cosac and Ptolemy gas and dust analysers.

“The last activity should be the most risky,” — meaning Philae’s APXS X-ray spectrometer, which needs to extend to very near the comet surface, and the SD2 drill.

If all goes well, “we should be able to… take a sample, to retrieve a sample, to see the sample with Civa and to analyse the sample… This is something we would do perhaps not in the next weeks but hopefully next month,” said Gaudon.

Comets are deemed to be frozen balls of dust, ice and gas left over from the Solar System’s formation some 4.6 billion years ago.

Understanding what constitutes this primeval rubble may give insights into how life on Earth began.

One theory is that comets smashed into our infant planet, providing it with precious water and the chemical building blocks for life.

To improve the data link with Philae, operators are manoeuvering Rosetta closer after problems with the orbiter’s navigational star-tracker forced it to be moved outward to a distance of about 200-240 kilometres (124-149 miles).

The tracker had started to confuse stars with dust particles blasting out of the comet.

“Rosetta is being manoeuvred now to come down again to 180 kilometres, which we reckon should be safe,” said Elsa Montagnon, Rosetta deputy flight manager at the European Space Agency (ESA).

“But as soon as we see activity coming back, we may have to retreat.”