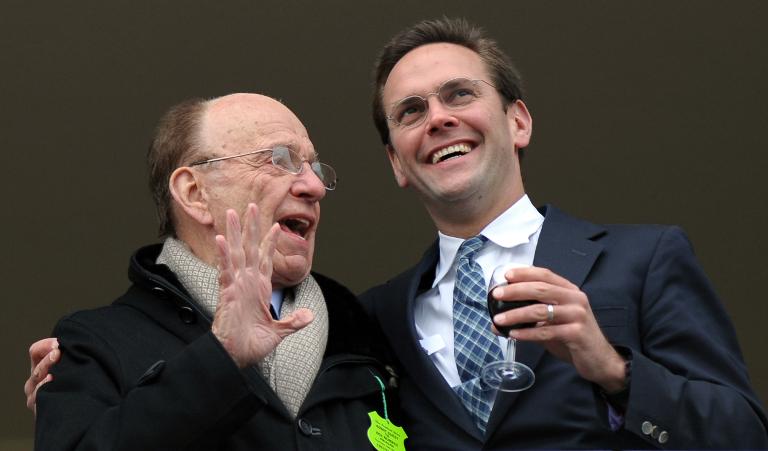 The media-entertainment conglomerate’s board approved the plan in which the Australian-born magnate would step down as CEO and become co-executive chairman with his other son, Lachlan.

The succession plan, which was leaked last week by sources close to the company, allows Rupert Murdoch to ease out of the day-to-day management of the group, with his sons sharing many of those tasks.

The statement said the company’s corporate functions and its global television and film operations “will now jointly report to Lachlan and James Murdoch.”

“It has always been our priority to ensure stable, long-term leadership for the company and these appointments achieve that goal,” Rupert Murdoch said in the statement.

“Lachlan and James are each talented and accomplished executives and together, we, as shareholders and partners, will strive to take our company to new levels of growth and opportunity at a time of dynamic change in our industry.”

The company has a range of film, broadcast and cable operations around the world and reaches some 1.8 billion people. It also has a 39 percent stake in the European satellite group Sky.

Lachlan and James Murdoch said in a joint statement: “We are both humbled by the opportunity to lead, with our father and the talented team of executives at 21st Century Fox, this extraordinary company.”

The statement added that Chase Carey, the deputy chairman, president and chief operating officer, will become the executive vice chairman and serve in that role through June 30, 2016.

James Murdoch, 42, will hold the CEO job at the group, which owns the Fox studios in Hollywood, and Fox’s television operations in the US and around the world.

He ran the Asian and European operations for his father’s group and was thrust into the position of crisis management in the phone-hacking scandal that rocked the company in Britain.

21st Century Fox was created two years ago when Murdoch split the struggling publishing operations from his News Corp. empire from the faster-growing media and entertainment operations.

Rupert Murdoch and his family remained in control of both companies after the split. He is executive chairman at News Corp. with Lachlan listed as co-chairman.

Lachlan Murdoch, 43, had been seen as the heir-apparent to his father’s empire but abruptly left the group in 2005 when he had the job of deputy chief operating officer.

He returned to the fold in 2014 when his father created new positions suggesting a key role in operations at both firms.

Rupert Murdoch has spent a lifetime building his empire from a single Australian newspaper he inherited.

In London, his purchase of the weekly News of the World in 1969 gave him a high-profile foothold in the British market. He went on to buy The Sun, a daily which he turned into a popular and big-selling tabloid.

In 1981 he acquired The Times and Sunday Times, prestigious broadsheets, despite intense opposition from parts of Britain’s establishment.

He relocated to the United States where more bold acquisitions followed and where he became a naturalized US citizen in 1985.

The empire came under pressure in recent years from the slump in newspaper revenues and the hacking scandal.

Murdoch shut the News of the World in July 2011 following public revulsion that it had hacked the voicemail of a schoolgirl, Milly Dowler, who was later found murdered.

News UK has paid out millions in out of court settlements including Â£2 million to Dowler’s family.

The News Corp split in 2013 was aimed at “unlocking value” in the both print and media-entertainment operations.

In the latest quarter, Fox reported net income of $975 million on revenues of $6.5 billion.

News Corp — which owns Wall Street Journal parent Dow Jones — reported a profit of $23 million on $2 billion in revenues over the same period.