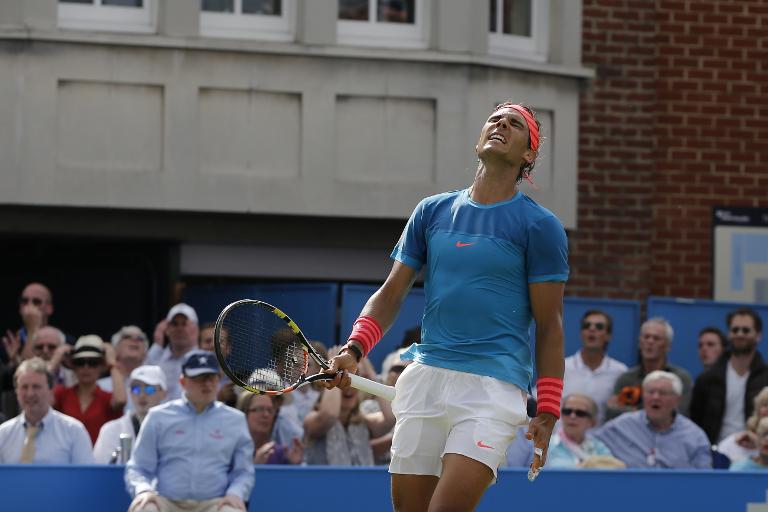 Rafael Nadal insists his shock defeat in the first round at Queen’s Club won’t damage his chances of a strong challenge for the Wimbledon title.

Nadal’s disappointing 2015 campaign suffered another setback on Tuesday when the 14-time Grand Slam winner was dumped out of the Wimbledon warm-up event by unheralded Ukrainian Alexandr Dolgopolov.

After the bitter blow of falling to only the second French Open defeat of his glittering career — against Novak Djokovic in the Paris quarter-finals — Nadal looked to be slowly getting back on track when he won the Stuttgart tournament last week.

But the 29-year-old’s 6-3, 6-7 (6/8), 6-4 defeat against world number 79 Dolgopolov in west London shattered his hopes of improving his ranking — currently at a decade low position of 10th — in time for his latest bid for a third title at Wimbledon, which gets underway later this month.

Yet rather than dwell on the frustration of his early exit, Nadal maintains he is happy he has already got enough practice on grass and put the loss down to the misfortune of facing an inspired opponent.

“It’s nothing very negative. I won a tournament last week and this week I lost an opportunity.

“But my feeling, my thoughts are no different today than yesterday. I’m playing better than before and enjoying being on court more than before.

“I’m not happy I lost a match I had a chance to win, but that’s it. That’s tennis on grass.

“Today was my turn. I accept that, and the good thing is I am positive mentally. I feel myself playing well.”

Nadal’s loss to Dolgopolov was his second worst of the year in terms of the lowly ranking of his opponent.

Michael Berrer, the German world number 127, is the only lower ranked player to have beaten Nadal in 2015 — in the Spaniard’s first match of the year in Doha in January.

Nadal knows he will need to raise his game to improve on his recent struggles at the All England Club, where he hasn’t been past the fourth round in his last three visits.

But the former world number one, who hasn’t got beyond the quarter-finals of a Grand Slam since last year’s French Open, says the opportunity to rest his body and his mind back home in Mallorca could be just as helpful as any extra time adapting to the grass courts.

“I hope to have some more good days of practice here and some good rest at home,” he said.

“I’m going to go back to Mallorca. I have been travelling a lot this year. Since the beginning of the season I have been playing more tournaments than normal.

“I need my periods of rest. After Roland Garros, I only came back home for two days and I was flying to Stuttgart to prepare for the tournament.

“I’m going to come back strong with a good week of practice before Wimbledon and I hope to be 100 percent ready to play there.

“I’m going to try my best at Wimbledon. This was good motivation for me today.”