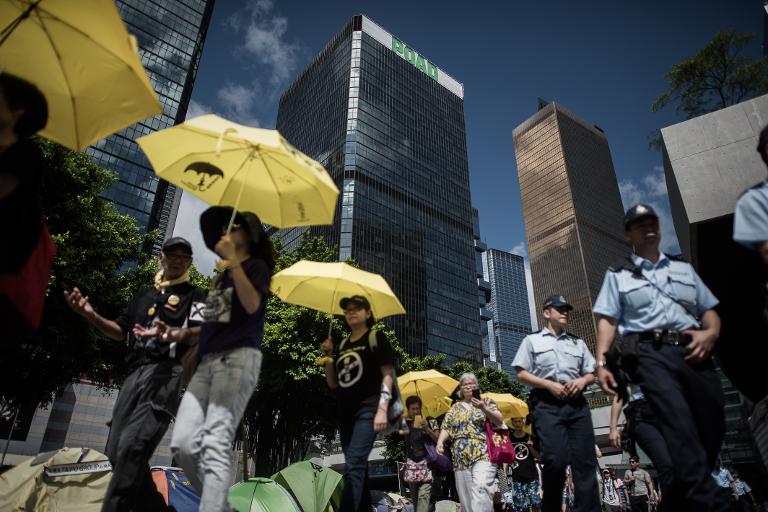 Hong Kong lawmakers laid bare the city’s entrenched political divide Wednesday as they locked horns over a reform package ahead of a key vote that pits democracy campaigners against the government.

Their debate on the Beijing-backed electoral roadmap will end in a vote later this week, marking the culmination of a fraught chapter which saw tens of thousands of protesters take to the streets last year.

Pro-democracy lawmakers are widely expected to unite against the bill, denying it the two thirds majority it needs to pass.

But few in the opposition camp say that will be a victory as they are bitterly disappointed not to have won any concessions.

Although the Hong Kong government’s plan would for the first time give all residents the right to vote for the chief executive in 2017, it adheres to a Beijing ruling that candidates must be vetted by a loyalist committee.

The proposal is derided as “fake democracy” by opposition lawmakers and campaigners.

Authorities in semi-autonomous Hong Kong have said repeatedly they cannot diverge from Beijing’s ruling last August, which sparked weeks of mass rallies and road blockades that brought parts of the city to a standstill.

Hong Kong’s deputy leader Carrie Lam warned any reforms would be off the table if the package was blocked as she kicked off the debate Wednesday afternoon.

“This administration cannot re-launch the (reform) process… political development will inevitably come to a standstill,” she said.

“In many advanced western democratic countries, not every resident has equal nomination rights,” she said, referring to the vetting procedure.

But pan-democrats blasted the plan, with one likening it to infested fruit.

“Let us show the world that we are not fools. We will not buy into such delusions for the sake of a quiet life,” said Civic Party lawmaker Claudia Mo.

Mo said accepting the proposal in the hope that Beijing would later soften its stance was like “pocketing a maggoty apple”.

“What the central government is forcing Hong Kong people to accept is not only a reform package but also an attitude to blindly conform… it’s a scam,” he said.

Pro-democracy lawmakers sat in the legislative council with multi-coloured placards marked with a cross to signal their intention to reject the bill.

– City at a crossroads –

Political analyst Sonny Lo called the vote “a critical juncture” and said the bill was unlikely to pass due to the pan-democrats’ pledge.

That paves the way for a further schism between Hong Kong and Beijing, he said.

“Beijing will lay the blame on those democrats who torpedo the political reform bill, which (it) believes represents a sincere concession from the central government.”

The atmosphere remained calm outside the legislature Wednesday evening where around 200 protesters from both sides gathered as the debate was played on loudspeakers.

“The pro-government side has not really listened to the people of Hong Kong or the pan democrats… all they say is to just take what is given,” said protester Victor Or, 21, a recent graduate.

Others said it was time to find middle ground.

“Both sides are pushing hard for their principles… they are not giving each other any negotiating space,” said one university student who gave her name as Cheng.

Police patrolled the legislative building as security was stepped up after an alleged plot which saw 10 people arrested Sunday and Monday and six charged with conspiring to make explosives.

Five were remanded in custody after appearing in court Wednesday and the others have been released on bail.

Police have said one of the 10 had claimed to be a member of a “radical local group”, although some local activists are sceptical.

Hong Kong is largely self-governing after being handed back to China by Britain in 1997 and enjoys much greater freedoms than on the mainland, but there are fears that these are being eroded.