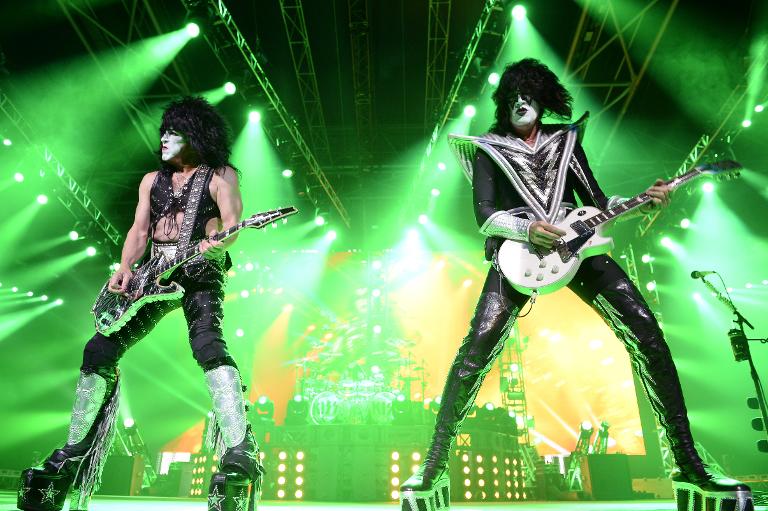 Downloading may be eviscerating the music industry, but rock legends KISS say they are pioneers in monetising their image — from a limo service, cruises, and even lunch with “Lord Simmons”.

The US band recognises it has escaped the worst impact of the availability of cheap music online thanks to the fact that its glory years were in the 1970s and 1980s, when the Internet was in its infancy.

Now, while exploring other ways to profit from its huge following, the band is also standing up for new, unknown talent struggling to win financial backing from music companies.

“It doesn’t hurt us, it only hurts new bands, and that’s the sad part,” said Gene Simmons, the 65-year-old bass guitarist and co-lead singer, his face streaked with demon-like paint.

Eric Singer, KISS’s 57-year-old drummer, whose make-up was done in his trademark cat face, said: “The mentality of young kids, they just think it’s OK, it’s common to go ‘Oh, I’ll just go online and get the music.’ They don’t realise you’re supposed to pay for it.”

He added that “rock ‘n’ roll’s not dying because of the bands or fans not buying it — it’s because there’s not a business to support it.”

Singer boasted that KISS had pioneered the exploitation of its brand, blazing a path that many other top artists now follow in a bid to prop up sagging record sales.

“There’s no doubt almost everything you see in a live rock or pop setting performance stagewise and all that, merchandise and everything… at the forefront was KISS.”

“If you’re in Las Vegas, go and play golf at our golf course…. If you want to hop into a limo, hop into our limo service: KISS Limos…. (and) we’re doing the KISS Kruise,” Simmons said.

The cruise sails from Miami to Jamaica later this year on board the Norwegian Pearl, “the central hub for all KISS maniacs worldwide”, according to the Kiss Kruise website.

Singer added that a lunch with “Lord Simmons” was also available, for a price.

The pair spoke to AFP just before performing at a Paris concert midway through a worldwide tour.

The tour is celebrating the band’s 40 years of performing, but the songs that drew the biggest welcome at the Paris concert were standards from its early years.

People in the venue, the 6,000-place Zenith in northeast Paris, cheered loudly when “I was Made for Lovin’ You” and “Rock and Roll All Nite” wrapped up a show that featured the band’s signature stage pyrotechnics and over-the-top posing.

One of their revenue-spinning activities could be seen backstage before the concert: around 100 people lining up to get individual photos with the band as part of a VIP package costing 1,000 euros ($1,100) each.

“They are our utter idols. This is a boyhood dream,” said one French fan, an 18-year-old student named Lucas Chaplin.