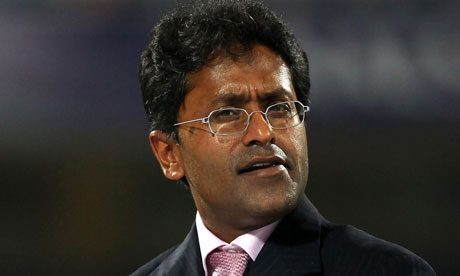 New Delhi: The former chief of India Premier league, Lalit Modi on Tuesday claimed he has a “family” relationship with Rajasthan Chief Minister Vasundhara Raje and External Affairs Minister Sushma Swaraj, whose husband and daughter had provided legal services “free of cost”.
Â Â Â Â Â  Â
Holidaying in the tiny Balkan nation of Montenegro, Modi said that Raje had accompanied his wife to Portugal for her cancer treatment two years ago. Raje became chief minister of Rajasthan for the second time in December 2013.

“Raje and Sushma supported me when my wife was sick,” he said in the interview.Â  “My wife was being taken to Portugal by whom? By Mrs Vasundhara Raje. Nobody knows that, I am putting that on record now,” Modi said, adding she accompanied his wife Minal in 2012 and 2013.

About his relationship with Sushma Swaraj,Â he told the TV channel, “It was a family, a legal whatever you may call it. We were very close. But the point is not that…I am very close to a lot of politicians, not only Swaraj.”

In that context, he said he was also helped by NCP leaders Sharad Pawar and Praful Patel and Congress leader Rajiv Shukla. Mr Shukla said he had not talked to Mr Modi for three years while Pawar said he tried to convince the former IPL chief to return to India and face investigations.
Â Â  Â
The comments of the tainted former IPL Commissioner came hours after his lawyers released documents that purportedly showed that Ms Raje had given a “Witness Statement” in August 2011 to British authorities supporting his case for immigration in Britain. Lalit Modi has made UK his base after leaving India, where he is under the scanner of the Enforcement Directorate over the IPL betting racket.

Raje has said she was not aware of this document. “Of course I know the family. I have always known them…(But) I do not know what documents they are talking about,” she told reporters in Jaipur.Â Â Â Â  Â

Claiming that his relationship with Ms Raje goes back 30 years, Lalit Modi said, “She openly agreed to be (to be a witness), but unfortunately by the time the case went to trial, she was already Chief Minister, so she did not come to become a witness. The statements she gave are all on records in the courts.”

Modi said he had done no wrong, has always gone by the book and paid all his dues.

Swaraj had found herself at the centre of a political storm after the UK-based Sunday Times reported a “leaked conversation” between influential Labour MP Keith Vaz and head of UK Visas and Immigration Sarah Rapson that cited Ms Swaraj to facilitate travel documents for Lalit Modi.Â  Finance Minister Arun Jaitley have backed Swaraj, saying whatever she had done was in good faith and bona fide.
Â Â Â  Â
Asked about the Congress allegation that he had been holidaying in Ibiza three days after the surgery of his wife, Modi said the family decided to celebrate because the “revolutionary treatment” received at the Portugal medical centre.