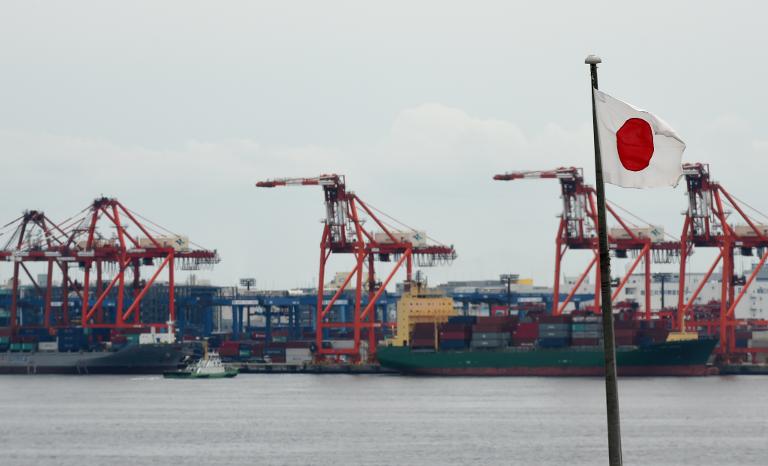 Japan posted a $1.75 billion trade deficit in May, a dramatic fall from a year earlier due to a drop in energy imports, but still not enough to offset lacklustre shipments overseas, official data showed Wednesday.

The value of the country’s imports declined 8.7 percent in May as falling oil and gas prices reduced Japan’s energy bills, while exports rose a weaker-than-expected 2.4 percent.

But there was still concern about the health of the Japanese economy, particularly that weak demand overseas could dent factory output as manufacturers try to cut an inventory buildup that boosted growth in the first quarter.

“The trade deficit narrowed… in May, but should creep higher in the second half of the year as the weaker yen pushes up import costs,” Marcel Thieliant from Capital Economics said in a commentary.

A 1.0 percent expansion in the world’s number three economy between January and March — or 3.9 percent on an annualised basis — was sharply up from an initial estimate of 0.6 percent growth.

The upbeat data was good news for Tokyo’s efforts to boost the economy, but household spending remains stubbornly weak as the Bank of Japan struggles to push up prices in a bid to end decades of deflation.

The BoJ has been forced to push back a timeline for hitting a 2.0 percent inflation target — a cornerstone of Prime Minister Shinzo Abe’s plan to kickstart the long-struggling economy.

Despite wage rises at big firms and a tighter labour market, convincing people to splash out on consumer goods has been a struggle after Japan raised sales taxes last year to help pay down a huge national debt.

The rise hammered consumer spending and pushed the economy into a brief recession. Japan limped out of the red in the last three months of 2014.

Analysts have warned that growth could slow sharply in the second quarter as Wednesday’s trade figures raised a red flag about demand overseas.

“The pickup in exports has been weaker than expected, reflecting a slow global recovery,â€ Atsushi Takeda, an economist at Itochu Corp., told Bloomberg News.

Fears about Japan’s trade balance have also focused on the sharply weaker yen — the currency is down by about half against the dollar since Abe took office in late 2012.

While the drop has boosted the profitability of major exporters, there are growing concerns that a further drop will do more damage than good as it boosts the costs of bringing goods into Japan.

Some currency traders are predicting the yen could fall to 140 against the dollar by next year, from 123.43 in Tokyo forex trading on Wednesday.