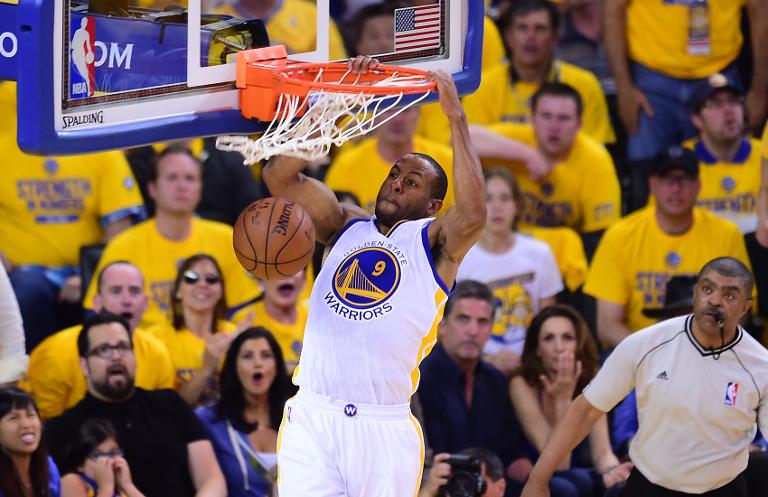 Andre Iguodala set the tone for the Golden State Warriors this season when he accepted demotion to a reserve role for the first time in his 11-year NBA career.

But it was when he was inserted into the starting lineup in the NBA Finals that he turned around the team’s fortunes and sparked Golden State over the Cleveland Cavaliers to bring the Warriors their first title in 40 years.

Iguodala scored a season-high 25 points and added five points and five rebounds in the Warriors’ 105-97 road victory Tuesday that brought a 4-2 triumph in the best-of-seven championship series and secured NBA Finals Most Valuable Player (MVP) honors for the 31-year-old forward.

“I was just happy for winning the ring. I didn’t care about anything else. This is just a plus,” Iguodala said. “This has been a long ride. It has been a great season, and we’re just going to enjoy the moment. This is an amazing feeling.”

Iguodala, an NBA All-Star and US London Olympic gold medalist, was an amazing finals MVP, the first one not to start every game of a finals or not to start any regular season contest. And this after starting all 806 combined career season and playoff appearances before this season.

“It’s really fitting the award went to Andre because he sacrificed his starting role from the first game of the season,” Warriors coach Steve Kerr said.

“He had never come off the bench once in his entire career and he sacrificed that job and that set the tone for everything we were able to accomplish so it feels like full circle to me that Andre received the award.”

The Cavaliers led the finals 2-1 when Kerr placed center Andrew Bogut with Iguodala for a smaller, faster lineup to create a faster pace and better starts. It worked. The Warriors won the last three games with Iguodala starting.

“Whether I’m scoring the ball or I’m not, I’m really effective in being a force on the court,” Iguodala said. “I think that has helped me throughout my career and it’s helped my career last this long and be this effective.”

As vital as his timely shotmaking was, it was Iguodala’s defensive ability to make Cleveland star LeBron James work hard and tire that proved most crucial.

“The last couple games he played well,” James said. “He made us pay with big shots, timely shots, getting out on the break, getting rebounds, getting assists. He played great, especially offensively. He made us defend him. He knocked down open shots. But I think his ability to play multiple positions allowed their team to be so dynamic.”

Iguodala lost sleep pondering the challenge of guarding James, who averaged 35.8 points, 13.3 rebounds and 8.8 assists — the best one-man effort in NBA history but not enough alone to beat the Warriors.

“I couldn’t sleep because I just kept thinking about the game and what do I need to do, how to guard LeBron,” Iguodala said. “That’s what makes him arguably the best player in the world right now, because you have to put so much effort in trying to contain him, because you really can’t stop him.

“I’ve been preparing for the moment for 11 years now,” Iguodala said. “I’ve seen him every year I’ve been in this league. LeBron doesn’t have any weaknesses. So you’ve got to pick up on the smaller things to try to make him uncomfortable, like knowing which side he likes to shoot threes off the dribble, which side he likes to drive. You just try to master your craft.”

Iguodala became only the second NBA Finals MVP to play alongside an NBA season Most Valuable Player, in his case Steph Curry. The only other was Magic Johnson as a 1980 rookie alongside season MVP Kareem Abdul-Jabbar.

“Oh man he was special,” Curry said of Iguodala. “He deserved the MVP for the way he impacted the game on both ends. Andre stepped up to that challenge every single night and is a huge reason why we’re celebrating right now.”