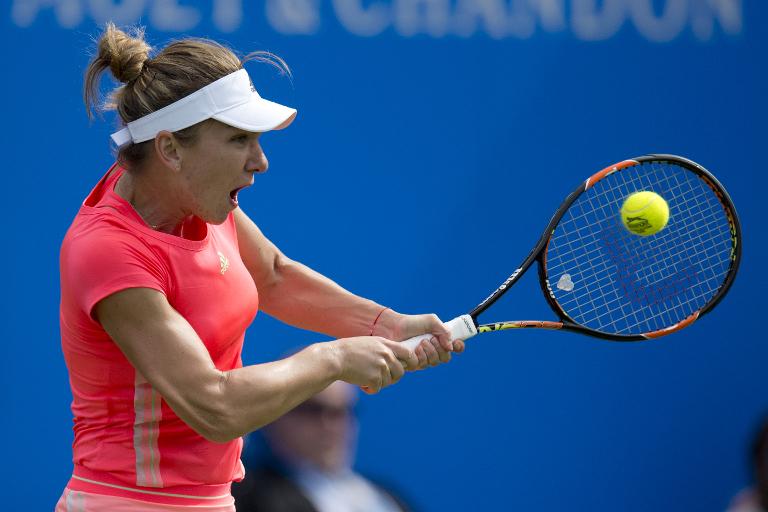 Simona Halep, who revealed herself as a serious Wimbledon challenger last year, suggested she may be even more dangerous than that this time around after an impressive start to her grass court campaign.

The top-seeded Romanian hit the ball as sweetly as if she were born to the sport’s natural surface, overcoming Naomi Broady, the British wild card entry, 6-4, 6-2 to reach the third round of the Wimbledon warm-up event.

Halep’s ground-stroking skills were remarkably forceful given how rarely she competes on this surface, and after breaking serve with perfect timing to reach 5-4, served out for the first set and tore through the second.

“I think I can say that I have the style to play on grass because my style is to play fast. I stay low because I am not very tall, so it helps me to stay there and to take the ball very quickly,” she said.

“I served really well today. I improved a lot on my serve. Now I have to improve more in my return. I returned good today, but still have to improve.

“So I think, yeah, I play well on grass and it fits my style.”

Halep will next play either Caroline Garcia, the 16th seeded Spaniard, or Klara Koukalova, a Czech qualifier, and if she wins again could have a tasty revenge opportunity in the quarter-finals against Eugenie Bouchard, the Canadian who denied her a place in the Wimbledon final last year.

Earlier, the former world number one Victoria Azarenka said she still dreams of winning Wimbledon, despite revealing some of the frustrations and uncertainties she has suffered in the last couple of years during an up-and-down opener.

Repeated injuries have prevented Azarenka from winning a title for 22 months, and she was five times within a point of going 0-5 down against Vavara Lepchenko, an American ranked outside the top 30, before fighting back, with a mixture of fierce hitting and varying confidence, to win 7-6(9-7), 6-4.

Azarenka started to serve commandingly and successfully take risks with ground stroke attacks whilst whittling away that big leeway. But she still needed to save a set point at 6-7 in the tie-break, and recover from the disappointment of losing her service break in the second set before prevailing.

“The most important thing I changed was the mindset,” she said. “It can put you down or lift you up. So it is part of your job to chose which way you want to go -â€“ up or down.”

It was, she concluded, “still a dream” to win Wimbledon. “It’s everyone’s dream to win it — and it’s definitely still mine.”

She next plays Zarina Diyas, the world number 34 from Kazakhstan, and could have a quarter-final with Karolina Pliskova, the impressively rising world number 12 from the Czech Republic.

Earlier, another former world number one Jelena Jankovic also made a winning start. The Serbian is another making her way back from injuries but looked comfortable as she overcame Tereza Smitkova, the world number 62 from the Czech Republic, 6-4, 6-4.

The loquacious Jankovic has not enjoyed a good grass court Grand Slam for four years, and this year is trying to put that right by playing two build-up tournaments instead of one.

“This match went very well. I served very well from the beginning until the end, and I was waiting for my chances to break my opponent,” Jankovic said.

“On grass it’s very important to strike the first ball and try to be in control of the points. I think I did that very well.

“So it was fun to be out there. I have not played well on grass the last couple of years, and I’m grateful and delighted that I’ve got the wildcard to play here to prepare better for Wimbledon.”

Jankovic next plays Casey Dellacqua, the world number 67 from Australia who was a surprise semi-finalist here last year.