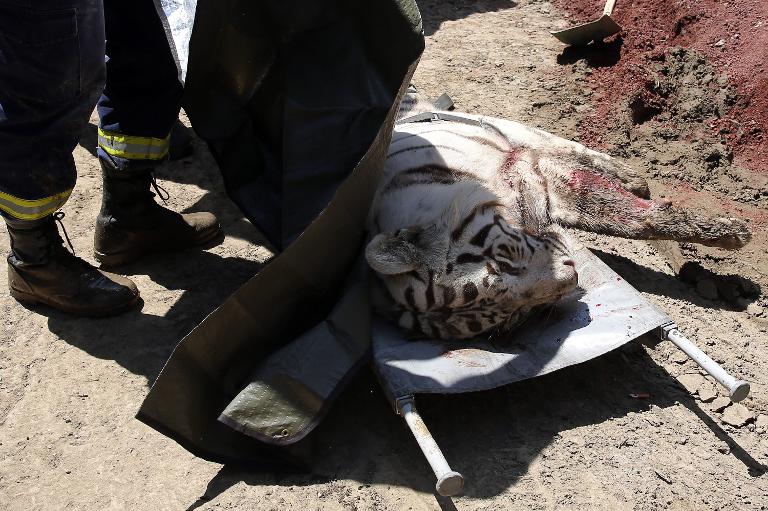 A rare white tiger that escaped from Tbilisi zoo in a freak flood mauled a man to death in the Georgian capital on Wednesday before being shot dead by police, officials said.

The interior ministry had initially said the animal was a lion and deployed special forces to hunt down the beast, which had been on the loose since the weekend flooding that killed at least 17 people.

But ministry spokeswoman Nino Giorgobiani later told AFP: “It was one tiger. It has been liquidated.”

There were fears that a second tiger was still at large after reported sightings, and the director of the zoo acknowledged that some animals were still unaccounted for.

“We still don’t know where another young tiger is and a hyena,” said director Zurab Gurielidze. “We don’t know if they drowned or are still loose.”

“We did a count of all drowned or killed animals, and a tiger that we previously considered shot turned out alive and hiding,” he told AFP. “I fully recognise my responsibility.”

Police said they had searched a parking garage in a fashionable central neighbourhood after receiving a tip that a second tiger was sighted there, but ultimately dismissed it as a false alarm.

But a local resident told AFP that she saw the animal out of her window. “It was an average-sized tiger, not a large one,” she said. “I cried out in fear and it ran away.”

The deadly attack came just two days after the country’s prime minister said all the animals which were swept from the zoo in the flood — including lions, bears and a hippo — had been killed or captured.

Witnesses told Georgian television they saw a person being mauled by a white tiger near Heroes Square next to the zoo.

“It was a white tiger, a big one. It attacked a man, it seized him by the throat,” one agitated witness told the Imedi channel.

The victim, a 43-year-old man, “was hospitalised with cardiac arrest and a severed carotid artery,” the head of Tbilisi’s Republican Hospital, Avtandil Imedadze, told AFP.

“The injuries were fatal, doctors were unable to restore his heartbeat to save him,” he said.

The Georgian government had initially warned residents to stay indoors after the disaster, which wrecked the zoo after the Vere river burst its banks on Sunday after heavy rain.

The flooding claimed the lives of at least 17 people, including three zoo workers, and caused massive damage to the city’s central districts, with five people still missing.

“I want to apologise for giving the wrong information, although it was based on the information from the zoo administration,” Garibashvili said in televised comments after the attack.

Over half of the zoo’s 600 animals were either drowned in the muddy waters or were later shot by police.

Georgian media said the tiger had been hiding in a warehouse and escaped the citywide hunt for the escaped creatures.

A witness told local television that the man mauled to death had been assessing the damage to the building.

Haunting pictures of frightened or dead animals made headlines around the world and stirred controversy over the government’s handling of Georgia’s deadliest floods in decades.

Animal rights activists have demanded an investigation into suggestions that some of the animals shot dead by police could have been spared.

But zoo director Gurielidze — who nearly lost his life trying to save the animals from the flood — has defended the government’s response, saying officials did their best to protect people.

Garibashvili said Wednesday that rebuilding the damaged roads and infrastructure could cost the government up to $45 million (40 million euros).