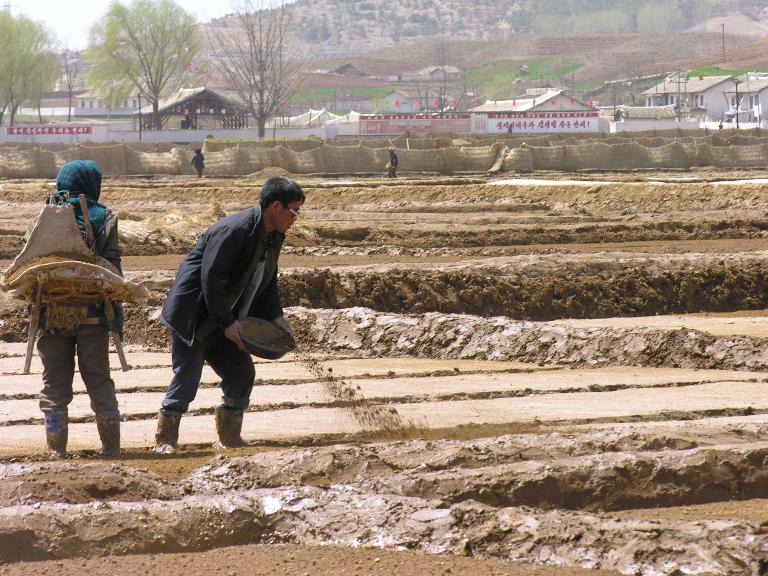 North Korea’s food supply faces a gloomy forecast this year due to a damaging drought which has sparked fears of worsening shortages in the impoverished communist country, experts said Wednesday.

Concern grew after Pyongyang’s official Korean Central News Agency (KCNA) reported Tuesday that North Korea has been hit by its worst drought in a century.

“The worst drought in 100 years continues in (North Korea), causing great damage,” it said, adding more than 30 percent of paddy fields across the country were “parching up”.

It is hard to get reliable information on the reclusive state, but South Korean weathermen said this year’s rainfall across North Korea has been far lower than the annual average, especially in its traditional rice belt.

“It is true that the northern part of the peninsula has been battered by a severe drought so far this year,” Kim Young-Jin, an official at the Korea Meteorological Administration, told AFP.

“The North’s traditional rice belt encompassing South and North Hwanghae provinces has been hit hard, receiving less than half the rain of an average year,” he said.

Last week the South’s unification ministry predicted North Korea’s food production this year could fall by as much as 20 percent from last year if the shortage of rainfall lasts until early July.

The prospects for this year are distinctly gloomy, given a prolonged drought and lack of fertiliser, it said.

North Korea has imported a large amount of fertiliser from China each year but fertiliser imports this year have dwindled significantly from a year ago, said Kwon Tae-Jin, a researcher at GS&J Institute, a Seoul-based think tank on agriculture.

“I don’t think the North’s exaggerating … The situation looks pretty serious,” he said, adding drought has already damaged the spring harvest of wheat, barley and potatoes, which account for 10 percent of total production.

In the past two years, North Korea has managed to avoid a food crisis despite a damaging drought, largely because of no summer flood and a favourable weather ahead of the main harvest season in the fall, Kwon said.

“But I see the likelihood for the same luck to be repeated for three years in a row extremely low,” he said.

“The situation is serious” in the North’s western region near Pyongyang, which produces nearly 70 percent of its entire crop production, he said.

North Korea has suffered regular chronic food shortages — hundreds of thousands are believed to have died during a famine in the mid-to-late 1990s — with the situation exacerbated by floods, droughts and mismanagement.

International food aid, especially from South Korea and the United States, has been drastically cut amid tensions over the communist state’s nuclear and missile programmes.

UN figures show up to 70 percent of the country remains food insecure and 28 percent of children under the age of five are stunted due to malnutrition.

In April the United Nations launched an appeal for $111 million dollars to help 70 percent of North Korea’s population now facing a food crisis.

David Kaatrud, the regional director of the World Food Programme, said in Seoul last week that the UN agency was closely monitoring the North’s weather conditions in order to send emergency assistance in case of a protracted dry spell.

“The concern is going to grow week by week until we get closer to the traditional July harvest,” he told the South’s Yonhap news agency.

North Korea has staged a desperate campaign to overcome drought and water shortages, vowing to continue its push to ease chronic food shortages.

Prime Minister Pak Pong-Ju told a parliamentary session in April: “The main thrusts for this year are to organise the economic work with a main emphasis on solving the food problem of the people.”

“The situation is not favourable at all, but it is premature to say whether North Korea may face a food crisis,” Kim Young-Hoon of the Seoul-based Korea Rural Economic Institute, said.

“Last year there was no serious food shortage in the North despite a damaging spring drought,” he said, citing partial agricultural reforms and refurbished irrigation facilities which have improved crop yields.

Kim Jong-Un, who became leader after the death of his father, Kim Jong-Il, in December 2011, allowed farmers to keep 30 percent of their production quota, plus any excess. Their portion was raised to 60 percent last year.