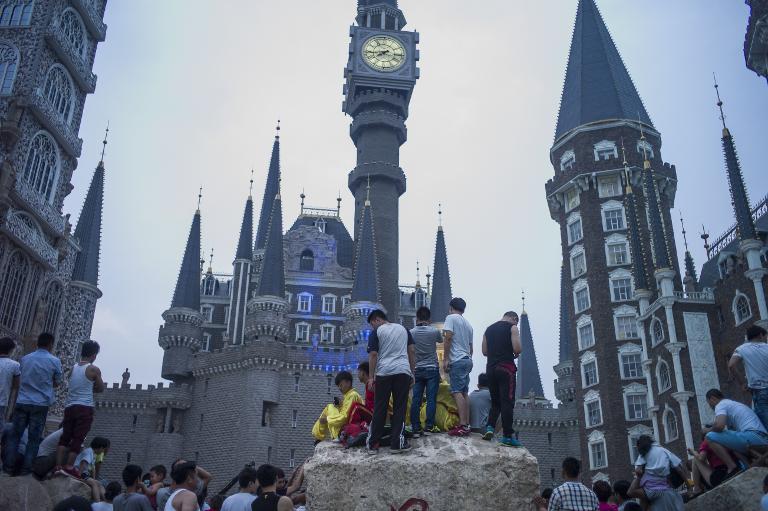 A Chinese university has earned comparisons with Harry Potter’s Hogwarts due to its bizarre castle campus, but local traditions supplied the magic at a Confucian-style ceremony for its degree graduates.

The university, which has more than 8,000 students, made headlines last year when overseas media compared its new campus building to the Hogwarts School of Witchcraft and Wizardry from the Harry Potter series of children’s novels.

“This castle has boosted the reputation of our academy across the world,” straggle-bearded college head Zhen Zhongyi told AFP as he stood in the brick and concrete building’s shadow.

“I aim to allow students to appreciate Western architecture without leaving the country,” he said, adding that he had invested 1.7 billion yuan ($274 million) in the academy so far.

The school’s first crop of Bachelor degree students graduated Tuesday, after enrolling at the institution four years ago, when the campus castle was little more than a fantasy.

“We saw all these buildings gradually rising up over the last few years,” said new graduate Wang Xiaotian. “Obviously I’m very proud of that”.

At a ceremony inspired by ancient traditions, Wang and more than 1,000 others donned flowing white gowns outside a red-beamed temple on the campus dedicated to ancient sage Confucius.

Ceremonies inspired by Confucian tradition and Chinese “Hanfu” gowns with gaping sleeves have become increasingly popular in the country in recent years.

A college official patted each student with a white brush before they bowed in front of headmaster Zhen, who wore a black gown and his greying hair in a bun.

After a golf-cart ride back to the castle, new graduates — some changing into wedding gowns — posed for pictures and selfies in the fairytale surroundings.

Some seemed nervous about the future.

“I don’t want to leave college. My friends are all here. The school is great,” said Deng Cui, from the academy’s urban design school, who wore a white Hanfu gown with green trimming.

Most Chinese universities are state-run, but Zhen’s academy is one of a growing number of private institutions.

The painter-turned-scholar said he raised his initial investment from trading art in the 1990s, and plans to expand the campus with a Baroque cathedral and a Middle Eastern-style mosque.

Zhen became aware of the Harry Potter series last year, he said, adding he noticed the building’s style is “pretty much the same” as Hogwarts’.

Asked about comparisons with the wizarding school’s charismatic headmaster Albus Dumbledore, he replied enigmatically: “I think our style of thinking is somewhat similar.”