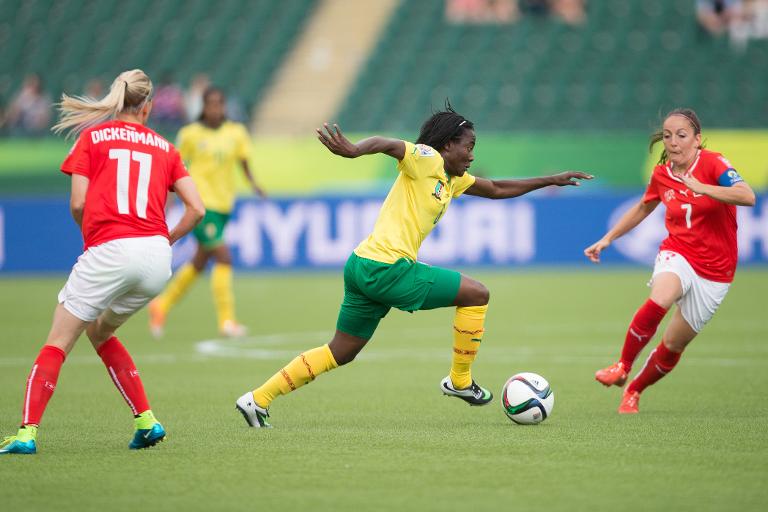 Cameroon came from behind to beat Switzerland 2-1 following second-half goals from Gabrielle Onguene and substitute Madeleine Ngono Mani in Edmonton on Tuesday.

They took the second automatic spot for the knockout round behind Olympic champions Japan in a Group C which also included Switzerland and Ecuador.

The 53rd-ranked African side next take on 1999 runners-up China in the knockout round in Edmonton on Saturday.

But Nigeria lost 1-0 to the United States and leave after the group phase for the sixth time in seven editions of the tournament, along with debutants Ivory Coast, at 67 the lowest ranked team in Canada.

“We are excited to qualify for the second round. Just the fact we are here will have a positive impact on Cameroon,” said coach Enow Ngachu.

“We’ve received many messages on social media. Some teams have started to be created in Cameroon and we hope that many more will be created.

“Compared to Nigeria, Cameroon is a small team. We’re not just representing Cameroon but carrying the colours of Africa.”

Ngachu said they were relishing the chance to take on China. “We are learning and if we can surprise China then fine for us,” he continued.

“The Chinese are a great team, they are very fast, with a Japanese-style football. We know it will be very tough, but every tournament has lessons.”

Cameroon’s first major tournament was the London Olympics where they were eliminated in the group stage.

“After the Olympics we came back and had to work,” the coach explained. “It’s the same team that played in London, they’ve learned a lot and are still learning. We have a long way to go.”

Despite Nigeria’s Super Falcons impressing in their opening 3-3 draw against Sweden, they soon had their wings clipped by Australia 2-0 and the United States 1-0.

US star Abby Wambach’s volley just before the break condemned Nigeria to bottom of Group D but coach Edwin Okon blamed lack of discipline for the result.

Defender Ugo Njoku was suspended for the game after elbowing Australia’s Sam Kerr in the face in an earlier match and Sarah Nnodim was sent off during the game.

“I don’t think they (USA) were very good — it was a lack of concentration on our part,” said Okon who refused to shake US coach Jill Ellis’s hand after the game.

“They were just lucky to win today. She (Wambach) only got that goal because of a lack of concentration from our defence.”

Nigeria, who have won nine of the eleven African championships so far, have competed in every World Cup since 1991 but only advanced once out of the group stage.

“We just have to go home and think of what went wrong,” the Nigerian coach said.

“We have worked so hard to try to present a good image of Ivory Coast,” Toure said.

The Ivory Coast were thrashed 10-0 by Germany, but suffered a narrow 3-2 loss to Thailand before falling 3-1 to Norway in the final group match on Monday.

“We wanted to do well in important matches like the one against Germany,” Toure added.

“We arrived 72 hours before the game, and were very tired from a long journey of 15 hours and with jet lag. Those are things that we would like to correct, to arrive earlier, and to play preparation games. We haven’t been able to play friendly games, and this has hurt us.

“I want to make an appeal to not only our federation, but to all of Africa, that women’s football has arrived.

“We believe in our women. We have a good team. Today the Ivory Coast showed it deserves a place in the World Cup. But we also deserved to be better prepared. We didn’t deserve to be humiliated.”