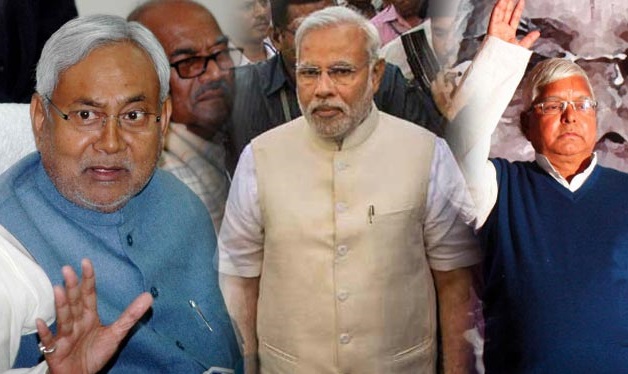 Patna/New Delhi: Amid stiff challenge from the opposition parties to declare the chief ministerial candidate for the upcoming Bihar Assembly polls, the Bharatiya Janata Party (BJP) alleged that the Janata Parivar combination of Lalu Prasad Yadav and Nitish Kumar are the face of ‘jungle raaj’, and said that the people of the state would give them a befitting reply by voting for development and good governance.

“Lalu Prasad Yadav and Nitish Kumar are the face of ‘jungle raaj’. The people of Bihar will bring an end to this ‘jungle raaj’. Development and public welfare have been the priority under the leadership of Prime Minister Narendra Modi. We are the face of good governance and the people of Bihar will definitely accept this face,” Ananth Kumar, who is the BJP’s in-charge for Bihar polls, said in Patna.

The Rashtriya Janata Dal (RJD), however, hit back at the BJP, and said that the saffron brigade’s ‘poster boy’ Narendra Modi would fail to deliver magic this time, as the party lacks both good faces and ideas.

“The BJP seems to have lost access in Bihar. For the last eight to ten months, the BJP appeared rudderless. I think there is a law of diminishing return which is working in the party. As far as their poster boy (Prime Minister) Narendra Modi is concerned, the BJP not only lacks good faces, they lack ideas. So, this is good for us,” RJD leader Manoj Jha saidÂ in Delhi.

“Nitish is our chief minister candidate. The RJD and all the other like forces will make sure that this fight in Bihar is a conclusive fight. We will win in Bihar and we won’t stop there,” he added.

The RJD claimed that the Janata Parivar would bring a national alternative to the kind of politics Prime Minister Modi indulges in.

“And, we will certainly try to decimate the sort of love and affection he has sought on crony capitalists surrounding him. The party lacks a coherent strategy and is extremely incompetent,” he said.

Jha further said that the grand alliance of the Janata Parivar in Bihar was the beginning of the end ofÂ BJPâ€™s dream.

“The people of Bihar understand the pulse of this nation. They have understood that the (Prime Minister) Narendra Modi-led government in Delhi is not the Government of the poor people or the farmers or the labourers or the lower middle classes. The government belongs to a top two percent of the elite of this country. And this is a dangerous message to go across, no matter how highly the people of that party may think of themselves,” he added.