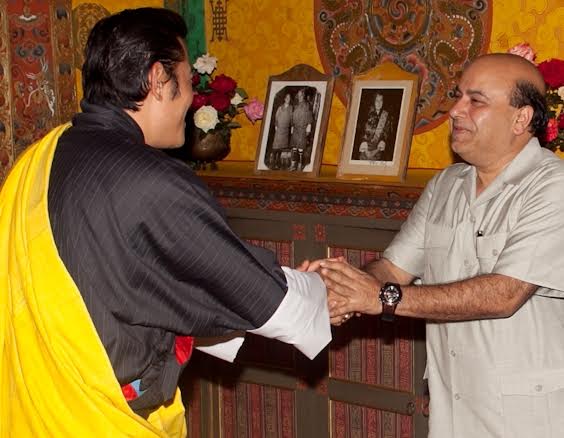 The Indian leaders were warmly greeted by His Majesty the King of Bhutan Jigme Khesar Namgyel Wangchuck on their visitÂ to the Royal Palace in Bhutan. They shall meet the Prime MinisterÂ on Thursday.Â The other delegates were Advisor Ashok Garg, Treasurer Vijay Mehta, Academician Prof. Geeta. Singh and Film Actress turned Environmentalist Kavita AshokÂ from New Delhi, India.

The Bhutan King fondly recalled that the Indian Prime Minister Narendra Modi had visited Bhutan exactly one year ago on 16th & 17th June 2014. And nowÂ  the prominent Indian NGO Delhi Study Group taking a leaf from the successful foreign policy of PM Modi, has embarked on a mission to cultivate & promote “People To People Friendship” between India & Bhutan.The Bhutan King appreciated the great efforts of DSG led by Jolly.

Â Modi won the hearts of all Bhutanese with his ” B-B-B “Â approach i.e.Â  Bharat for Bhutan and Bhutan for Bharat revealed His Majesty the King of Bhutan to Indian leader Mr Vijay Jolly in the course of their meeting in Thimpu. His Majesty regaled the DSG delegation to “Gramophone Music” system ofÂ traditional times Â instead of MPS-3 music. He revealed his literary interests Â by advocating thatÂ  younger generation should read at least 10 books a year and 5Â pages every day to enhance their knowledge apart from computer gadgets in modern times.

During the course ofÂ introductory visit to foreign office, the Foreign Secretary Teshering Â DorjiÂ shared his great experiences Â with visiting Indian leader JollyÂ including his college stint in Kirori Mal college, Delhi University . He also said that last year when visiting Indian PM broke protocol, alighted from his security proof cavalcade to greet young children, women and other citizens on crowded Thimpu streets, it was a great security concern for all ! But with Gods grace all went well. And the visit was grand & successful for strong Indo-Bhutan ties.

The Indian delegation visited Indian Embassy in Bhutan. They were closet with Indian Ambassador Gautam Bambawale for nearly 60 minutes. They were extensively briefed on closeÂ Indian ties with Bhutan since the time of ourÂ first Indian Prime Minister late Jawahar Lal Nehru.

Latter on Jolly and his colleagues witnessed the World Football qualifying match between Bhutan & China along with a total sellout crowd of more than 10,000 spectators at the Royal Bhutan Stadium in Thimpu.