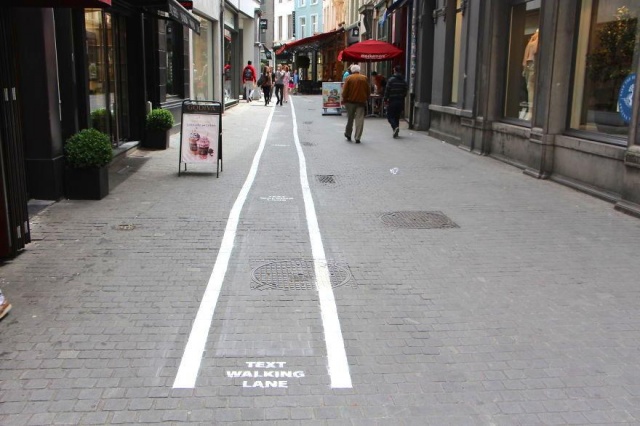 Washington: Can’t keep your eyes off your phone? Now, people can stay connected all times without worrying about running into another car, as Belgium has created a separate lane for smartphone addicts.

Thanks to the growing distraction and risks that smartphones cause, Belgium has come up with an answer in form of several “text walking lanes.”

Just like Washington DC and Chongqing in China, the Belgian city of Antwerp has painted lanes designated for smartphone use.

The measure happens to be a marketing stunt by local mobile firm Mlab, whose spokesperson said that everyone today walked through the streets while texting without paying attention to their surroundings.

According to US ER data, pedestrian injury due to handset distraction has gone up by 35% in the last five years.

The report points out that in an effort to reduce the number of accidents linked to distracted walking, states such as Utah and New Jersey have experimented with fines for wandering texters who put themselves in hazardous situations.

In addition, speed limits were reduced last year in parts of New York City for safety reasons. The move should mean that if a smartphone user does wander into the street without realizing, the driver may be able to take avoiding action instead of mowing them down.