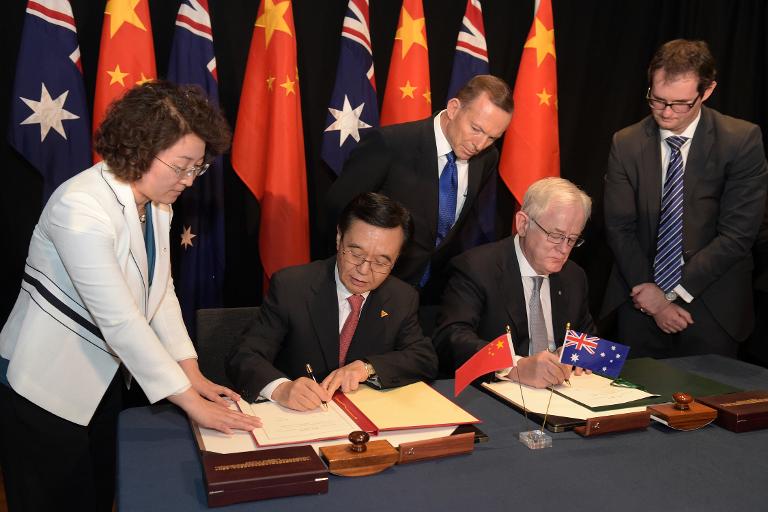 Australia and China signed a landmark trade deal Wednesday after a decade of talks, providing a boon for growth and jobs by abolishing tariffs across a raft of sectors.

“The leaders of our two countries have attached great importance to the signing of this document,” said Gao. “It is a milestone in bilateral relations.”

Australian Prime Minister Tony Abbott called it “a momentous and historic day for our two countries”.

Under the deal more than 85 percent of Australian goods entering the country will carry no penalty, rising to 95 percent in coming years.

With Australia having already sealed similar pacts with Japan and South Korea, a large percentage of Australian exports will soon be tariff-free.

Australian businesses currently face charges of up to 40 percent on goods sent to China, but under the deal penalties on virtually all resources and energy products — a key plank in the trade relationship and among Australia’s top exports — will be abolished.

In return, Australia will remove the existing five percent tariff on Chinese electronics and whitegoods, meaning cheaper goods for Australian consumers but some reduction in revenue.

China also won concessions on foreign investment, with the threshold for government review to be lifted in most areas apart from agricultural land and agribusiness.

In a statement, the Chinese commerce ministry said the pact would help facilitate the China-driven FTAAP, or Free Trade Area of the Asia-Pacific.

Beijing has embraced the broader FTAAP, which is seen as a rival to the proposed Trans-Pacific Partnership pushed by the United States but which excludes China.

Robb said that, together with the Japanese and South Korean pacts, the Chinese deal would underpin Australia’s prosperity for years to come.

“Given what’s going on in the region, the extraordinary explosion of people going into the middle class, this is a landmark set of agreements,” he said.

“It will see literally billions of dollars, thousands, many hundreds of thousands of jobs, and will underpin a lot of our prosperity in the years ahead.”

One contentious outcome could be the temporary employment of Chinese people in Australia’s high-pay workforce, a move condemned by unions.

Electrical Trades Union national secretary Allen Hicks said there was concern that Chinese investors would be able to use Chinese workers on projects in Australia that involve an investment of more than US$150 million.

“Any claimed benefits from this FTA will pale into insignificance compared to the lost opportunities for working Australians and the impacts that will have on our society,” he said.

“This agreement is an absolute disgrace and its signing marks a sad day in Australian history.”

In contrast, the Australia China Business Council said it came at an opportune time as China’s economy shifts to consumption-driven growth, driving demand for Australian premium products and services.

“The deal will ensure that Australian companies can compete on a level playing field with those countries holding existing FTAs and will give us a significant advantage over some of our largest competitors including the US, EU and Canada,” said council president John Brumby.