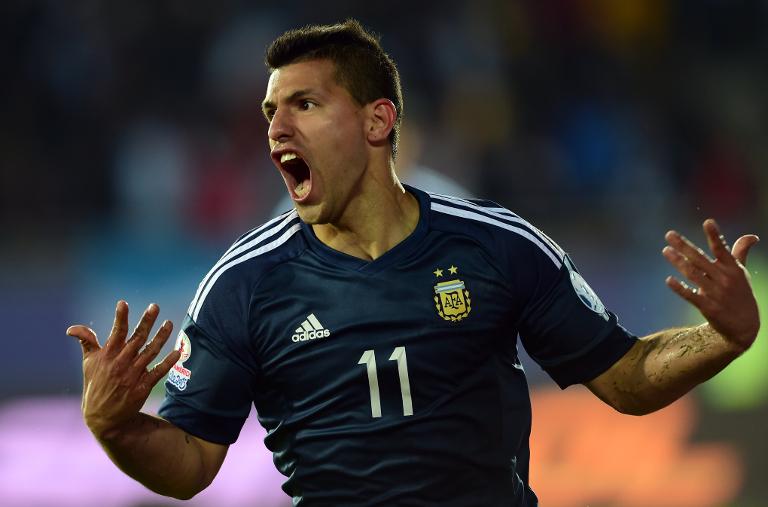 Sergio Aguero reignited Argentina’s Copa America campaign with the only goal in a 1-0 victory over historic rivals Uruguay, as the tournament was rocked by the arrest of Chile star Arturo Vidal for drunk driving after a car crash.

Aguero bagged his second goal of the tournament in the 56th minute of a niggly battle between the 1930 World Cup finalists in their 199th meeting.

The result leaves Argentina firmly on course to win Group B, with only one game against tournament minnows Jamaica, beaten 1-0 by Paraguay in Tuesday’s early game, remaining.

But the action on the pitch was overshadowed late Tuesday by the revelations concerning Chile midfielder Vidal.

Vidal, who became the top scorer for the tournament on Monday with three goals after bagging a brace in the hosts 3-3 draw with Mexico, was detained by police after testing positive for alcohol following a late night crash.

Vidal, who was traveling with his wife when the accident occurred, suffered “minor injuries” but his wife’s wounds were described by police colonel Ricardo Gonzalez as “moderately serious”.

Images on Twitter said to be Vidal’s vehicle showed a red Ferrari with the driver’s side reduced to a mangled wreck.

“Because he was driving under the influence of alcohol … (Vidal) is being held,” Gonzalez said.

Immediate details about the crash were scarce, but officials said Vidal’s car had collided with another vehicle.

The player posted a short video message on YouTube.

“Today, I had a car accident. It was not my fault. I’m fine, my family’s fine. Thank you for everything,” Vidal said.

It was not immediately clear how Vidal’s arrest would affect his participation in the tournament.

Vidal is no stranger to controversy. He was hit with a record fine by his club side, Italian giants Juventus, after a drunken night out last year.

He was also one of several Chilean players temporarily kicked out of the national team squad in 2011 after arriving late for training following an unauthorized night out.

Chile face Bolivia in their final Group A on Friday, where they will be attempting to make certain of their place in the last eight.

Earlier Tuesday, Argentina captain Lionel Messi praised his team-mates for keeping their cool in a hardfought win over Uruguay.

“It was a tough match from their side. They didn’t want to play that much,” said Messi, who was subjected to a series of cynical fouls throughout.

“They were tough. They were hard on us. But we showed that we can also play that kind of game if we need to.

“Yet we tried to keep playing our game and that’s how we found the goal through Kun (Aguero).”

A tense first half had seen Argentina dominate possession and territory but fail to break down a resolute Uruguayan defense.

The two best chances of the opening period both fell to Argentina, with Manchester United winger Angel Di Maria testing Fernando Muslera in the ninth minute with an angled shot that the Uruguayan goalkeeper needed two attempts to gather.

Muslera was pressed into action again midway through the half, producing a superb one-handed save to deny Aguero after the striker met Messi’s sublime cross with a downward header.

On the stroke of half-time tempers flared once more with Argentina enforcer Javier Mascherano booked for sliding through Uruguay playmaker Nicolas Lodeiro, who had earlier seen yellow for a wild challenge on Zabaleta.

The winning goal came on 56 minutes, when a cross from Pablo Zabaleta was met by his Manchester City team-mate Aguero, who headed past Muslera.

In Tuesday’s other game, Paraguay edged closer to the last eight with a 1-0 win over Jamaica.

A freak goal from Edgar Benitez proved the difference, the striker unwittingly deflecting a hapless headed clearance by Jamaica goalkeeper Duwayne Kerr into an empty net on 36 minutes.

The win means Paraguay need only a draw against Uruguay to be sure of finishing second in the Group.