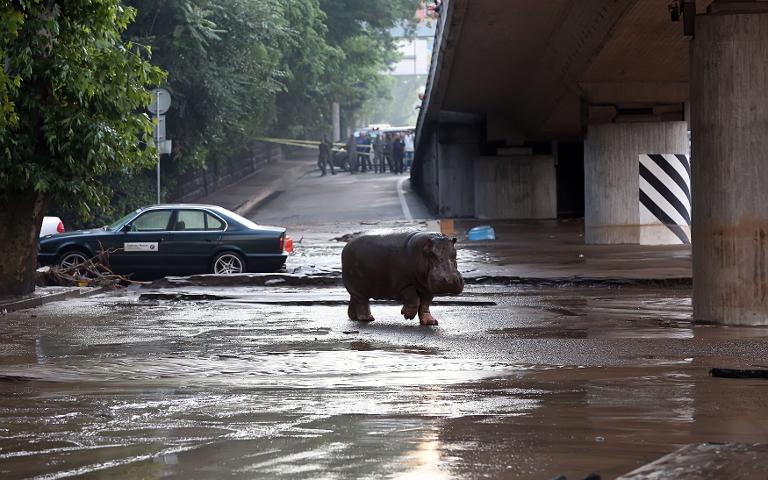 After freak floods in Georgia saw hundreds of zoo animals swept to freedom, activists are demanding an investigation into revelations that police shot many of the creatures dead as they roamed the streets.

The haunting pictures of frightened or dead animals made headlines around the world and stirred controversy over the government’s handling of Georgia’s deadliest floods in decades, which killed 16 people including three of the zookeepers.

The aftermath of Sunday’s deluge — which tore through the capital Tbilisi, wrecking the zoo — looked both tragic and surreal.

A hippopotamus swam in the muddy flood waters and a bear perched on an air-conditioning unit on the side of a building. The corpses of a lion and a pony lay on the road, while a huge alligator made its way past parked cars.

Zookeepers say that of the roughly 600 animals in their care, more than half had perished in a “hellish whirlpool” or died at the hands of the authorities.

It remains unclear how many were shot dead by police, but they include lions, tigers and wolves.

Critics say that in at least in some of the cases, the animals did not need to be shot.

“There are signs that in some instances animals were killed just because police overreacted,” Tina Chavchanidze, chair of the Tbilisi-based Committee for Animal Rights, told AFP. “This must be investigated.”

Among the victims was one of the zoo’s most famous residents — a rare white lion cub, Shumba, known for his friendship with a poodle.

UN officials said Shumba was “shot in the head on site”. Zookeepers confirmed the cub was dead but said it was unclear whether it was shot or had drowned in the muddy waters, like many of the other animals.

“A large part of the zoo is simply non-existent,” spokeswoman Mzia Sharashidze told AFP. “It would be good to carry out an investigation.”

Zoo director Zurab Gurielidze and his wife nearly lost their lives trying to save the animals from the flood.

Gurielidze was among those to defend the government’s response, saying officials did their best to protect people.

The editor of National Geographic magazine in Georgia, Levan Butkhuzi, said he had seen a police officer shoot dead “a wolf which was immobilised and posed no threat to humans” as he participated in the relief effort.

But “apart from this isolated case, I see no reason to accuse police of any wrongdoing,” he told AFP.

Located in a valley, Tblisi has repeatedly suffered severe flooding in recent decades.

Critics say the authorities learned nothing from a 1967 flood that also saw zoo animals carried away. Another flood that further damaged the zoo in 2012 should have been a warning sign that the facility needed to relocate.

“No preventive measures have been implemented since then,” pointed out the UN’s Office for Disaster Risk Reduction.

“The zoo is in a vulnerable city-centre site, with most of the cages low-lying and therefore at serious risk from flash floods.”

Several years ago the Georgian government lent its support to a plan to relocate the zoo to a safer location and even allocated a large plot of land, but the project was put on hold because of its enormous cost of up to $500 million (445 million euros).

Zoos around the world have contacted the Tbilisi zoo offering to help — including by replacing some of the animals — but some observers are wondering whether it should be shut down for good.

“There is no need to restore anything,” liberal Russian commentator Sergei Medvedev wrote on Facebook. “In memory of this tragedy there should be no zoo in Tbilisi.”