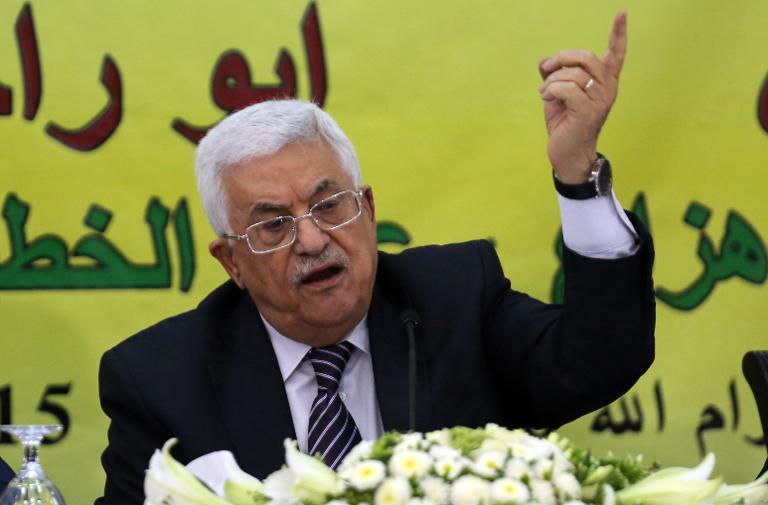 The Palestinian government will resign with 24 hours, president Mahmud Abbas announced late Tuesday as a dispute over the governance of Gaza came to a head.

Government officials did not confirm the planned resignation, but did acknowledge that such a move has been under discussion for several months over the cabinet’s inability to operate in the Hamas-run Gaza Strip.

Such a move would deal a heavy blow to a Palestinian unity agreement signed in April 2014 which sought to end seven years of bad blood between Abbas’s Fatah movement and its rival, the Islamist Hamas movement.

“Within 24 hours the Palestinian government will resign,” Abbas told members of the Fatah Revolutionary Council, according to several senior officials who attended the evening meeting in the West Bank city of Ramallah.

An official in the president’s office said Abbas would meet prime minister Rami Hamdallah at midday (0900 GMT) on Wednesday.

Government spokesman Ihab Bseiso said he was unaware of the imminent resignation of the cabinet, however.

“We had a meeting today and we didn’t discuss this issue,” he told AFP, while confirming that the premier would meet Abbas on Wednesday “to discuss how the government will work.

“This meeting will clear up the dispute,” he added, without elaborating.

Hamas ruled Gaza for seven years, but its administration stepped down last June when the Ramallah-based consensus government was sworn in.

Comprised of independent technocrats, the government lineup was agreed by both Fatah and Hamas and given a mandate to govern both the West Bank and Gaza, ending seven years of separate administrations.

But in practice, it has been unable to extend its authority to Gaza, which was devastated by a deadly 50-day war with Israel last summer and where Hamas remains the de facto power.

Ahead of Tuesday’s meeting, the Revolutionary Council’s secretary general told AFP that the cabinet would stand down over its inability to rule in Gaza.

“The government will resign in the next 24 hours because this one is weak and there is no chance that Hamas will allow it to work in Gaza,” Amin Maqbul said in remarks confirmed by another senior Palestinian official.

The government’s inability to exert its authority in Gaza has been a major point of internal dispute between Fatah and Hamas.

It has also slowed down the vital process of rebuilding Gaza after last summer’s devastating war.

The government had been expected to play a key role in the reconstruction of the territory by reasserting its authority in Gaza and taking over the border crossings with Israel and Egypt.

But with the two sides increasingly divided over a long-running dispute about employees, it never happened.

Officials did not say whether the consultations to form a new government would include Hamas.

A government source confirmed that the idea of resigning had been discussed for weeks.

“There have been discussions inside the government about resigning if they are unable to do anything for Gaza,” he told AFP.

He said the move had been on the table since a government delegation was forced to cut short a trip to Gaza in late April.

The 40-strong delegation, including eight ministers, arrived in Gaza on April 19 for a week-long trip but was forced to leave a day later after Hamas accused the officials of bias in resolving a dispute over employees’ salaries.

The formation of the consensus government was the first fruit of an April 2014 reconciliation agreement between Hamas and Fatah which sought to end seven years of bad blood between the two Palestinian nationalist movements.