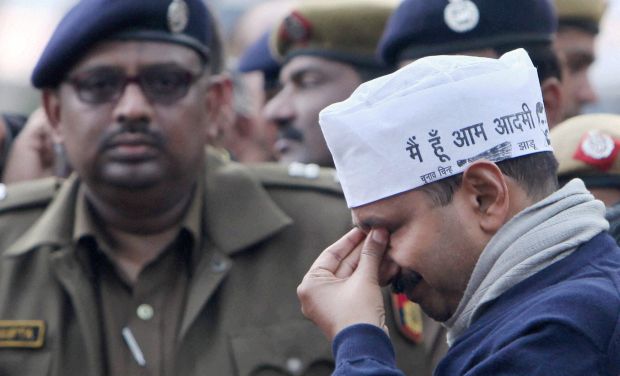 New Delhi: Woes continued to plague the Arvind Kejriwal led Delhi government as a probe by Delhi Police has revealed that 21 AAP MLAs have 24 criminal cases against them.

Delhi Police will look to hasten the investigations in these cases andÂ is in the process of filling a charge-sheet against the tainted MLAs.

If reports are to be believed, the charge sheet may include names of Delhi Chief Minister Arvind Kejriwal and his deputy Manish Sisodia. The police will file charge sheet in all the criminal cases against AAP MLAs, pending from last two years.Â

The Delhi CM has been charge sheeted six times by Delhi Police and probe is on in two other cases. Kejriwal’s cases involve holding protest/demonstration despite prohibitory orders and preventing public servants from performing their duty. In one case against him the court has fixed August 4 as the date for arguments on charge.

Deputy CM Manish Sisodia, who participated at Railway Bhawan protest in January 2014, has been booked for violating prohibitory orders alongside Kejriwal.

AAP Kondli MLA Manoj Kumar has four FIRs pending against him and is being probed on charges of cheating and forgery, instigating security forces and misbehaving with woman.

Ex-law minister Somnath Bharti’s wife too has accused him of physical and mental torture.

“To divert attention from Sushma, story of 21 AAP MLAs to be arrested, is planted by Modi government. Gullible TV channels are gleefully running. Some times I really feel sorry for the quality of TV reporters. They take direct dope from Police/Officials/ministers without verification,” Ashutosh tweeted. “My name is missing in the list of people to be arrested by Delhi Police. Many cases against me also. Feeling left out and unimportant,” the journalist-turned-politician added.

AAPâ€™s mind set of â€œputting the guilty behind barsâ€ has landed the party in a spot. While the people of Delhi are still yet to receive good governance after a historical mandate to the party, the AAP finds itself in hot waters.