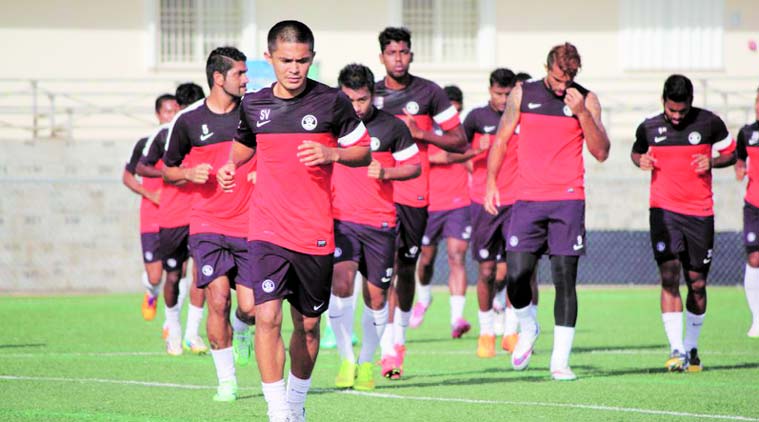 Hagatna: In keeping with coach Stephen Constantine’s new rotational captaincy policy, prolific striker Sunil Chhetri has been handed the armband as India aim for full points against a motivated Guam in the 2018 FIFA World Cup qualifiers in Hagatana on Tuesday.

While India went down 1-2 after a spirited fight to higher-ranked Oman in their previous preliminary joint qualification round 2, Guam created history with an upset solitary goal win over Turkmenistan.

The Blue Tigers though start as favourites despite the fact that hosts Guam come into the match on the back of a win against Turkmenistan.

India will draw inspiration from the fact that they defeated Guam 4-0 in their previous match, besides counting the positives from their narrow defeat to Oman at Bangalore.

That Constantine has fielded 13 debutants in the last three matches is a well known stat in Guam.

India gave plenty of hope in their last outing and will be looking to take some aspects of their style of play, moving forward, from the game at the Kanteerva Stadium.

As far as the team combination is concerned, Constantine is unlikely to tinker with the line-up.

Chhetri and Robin Singh will lead the attack. Chhetri made a statement by scoring a gem of a goal against Oman and the Bengaluru FC skipper will look to add to his tally against the Guam defense.

Chhetri’s importance can be gauged from the fact that he has scored all three goals that India have scored in the World Cup qualifiers till now.

Jackichand Singh is expected to be given another start on the wing and C K Vineeth, despite a none-too-impressive game against Oman, could be on the other side of the flank.

The midfield combo of Sehnaj Singh and Eugeneson Lyngdoh will have a lot riding on them as well.

In defense, Arnab Mondal and Dhanachandra Singh are expected to hold fort as central defenders, while Lalchhaummawia Fanai will regain his left-back slot.

Subrata Paul, who had an excellent outing against Oman, will man the post.

The Guam team will looking upto Shane Malcom upfront, and he is likely to pair up with John Matkin. Operating in the hole behind them will be Ian Mariano.