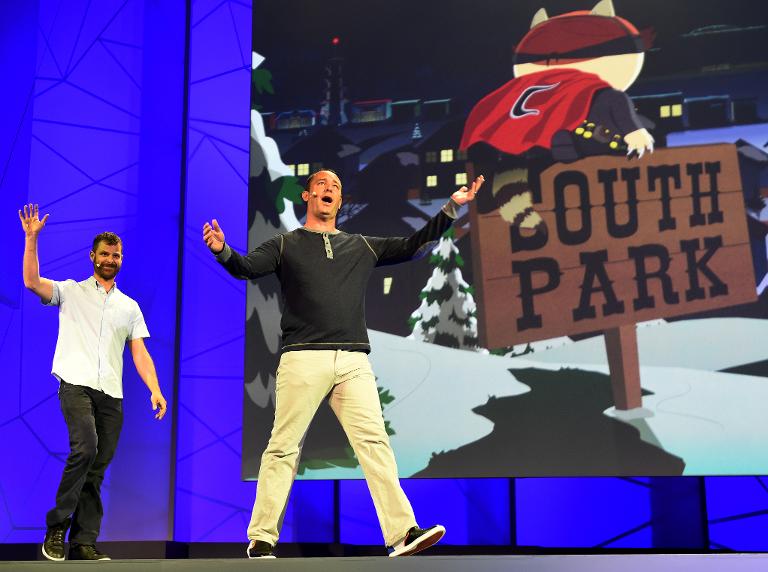 Ubisoft has mixed carnage, humor and music in a powerhouse lineup of video games making debuts at an Electronic Entertainment Expo extravaganza in Los Angeles.

“South Park” co-creators Matt Stone and Trey Parker said the sequel to the game “Stick of Truth” was a chance to get the game that features “South Park” characters “right” this time around after the first version stumbled during development.

The sequel will continue the story of the first game, with the player taking on the role of a new kid in the neighborhood.

Guillemot also introduced â€œFor Honorâ€ a sword fighting game in development that pits small bands of players against one another in the roles of warriors such as knights, samurai, and Vikings.

Ubisoft showed off a trio of action shooter games stressing enhanced online co-operative combat and expanding its franchise based on the work of military thriller author Tom Clancy.

The forthcoming “Rainbow Six Siege” game will pit teams of four players each against one another, one as armed men who have barricaded themselves inside a building and the other as the strike force intent on getting inside and eliminating their adversaries.

The game features close quarter combat, environments almost entirely destructible, and “once you die you stay dead,” according to actress and gamer Aisha Tyler, who hosted the event.

Appearing at the presentation was actress Angela Bassett, the voice behind an anti-terror unit deputy director in the game.

â€œI have always gravitated towards roles that challenged as an actor, so in that respect, it wasnâ€™t much different (from acting in film).â€ she told Tyler on stage. â€œIt was all about character. It was all about story.â€œ

Guillemot said that Ubisoft’s office in Paris has been â€œworking in secrecyâ€ on another Tom Clancy offering pitting an elite military force against a fierce drug gang in South America.

Ubisoft also showed off clips from a coming installment of â€œAssassin’s Creedâ€ to be set in London in during the Industrial Revolution.

Ubisoft boasted that â€œJust Danceâ€ has become the biggest music video game franchise of all time, and that a coming version will eliminate the need for motion detecting accessories on consoles, letting people use mobile phones as controllers when they face off to see who is best at matching on-screen moves.

With the release of â€œJust Dance 2016″ in October, Ubisoft will introduce an on-demand streaming music service so people can compete to fresh songs instead of being restricted to libraries that come with games.

I feel like this video game is such a part of pop culture,â€ said musician Jason Derulo, who performed a song that will be available in the new version of the game.