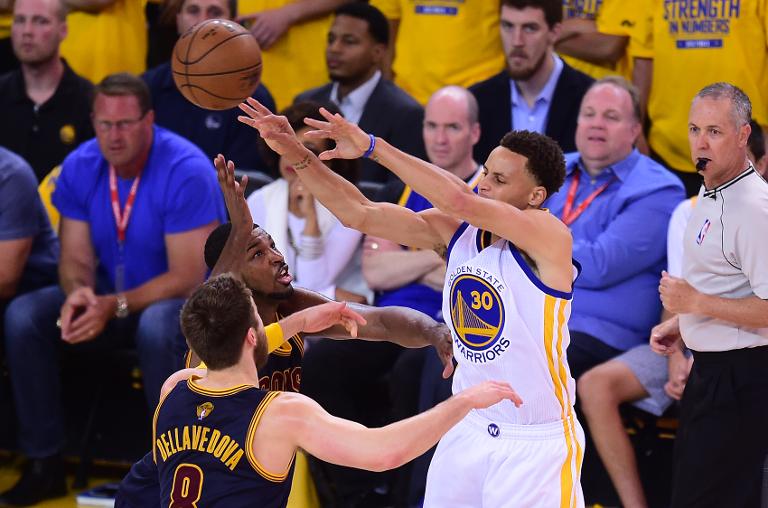 Steph Curry and his Golden State teammates face the biggest game of their careers Tuesday as the Warriors visit Cleveland with a chance to capture their first NBA title in 40 years.

Coming off a 104-91 home triumph Sunday, the Warriors own a 3-2 edge in the best-of-seven championship series with the Cavaliers needing a game-six victory to force a seventh game Friday back in California.

“This is going to be the biggest game any of us have ever played in our careers,” said Warriors forward Andre Iguodala.

“It’s all about staying locked in, about knowing it’s not going to be given to us. We have to earn it.”

NBA Most Valuable Player Curry has recovered from dehydration after a 37-point performance in game five and will be ready Tuesday.

“The closeout game is always the hardest game in every series, but particularly in the finals,” Warriors coach Steve Kerr said.

“There’s a lot of emotion. You’re right there on the cusp of something, but you still have to get the job done, and in this case we’ll be on the road against a great team.”

None of Golden State’s players were alive in 1975 when the Warriors last won the NBA Finals. And the lineup could become the first with no prior NBA Finals experience to take the crown since the 1991 Chicago Bulls.

“Treat it like game seven,” Warriors guard Klay Thompson said. “As much as we would love to win it in front of our fans, we really want to finish it in Cleveland.”

But LeBron James, carrying the scoring and set-up load for the injury-hit Cavaliers around a set of role players, has other ideas.

“We don’t want them celebrating at all, no matter if it’s on our home floor or their home floor,” James said. “We’ve come this far and we’ve been very good at home.”

Fatigued by a fast-paced Warriors lineup and limited substitution options, the Cavaliers were beaten handily at home in game four, something they hope to avoid repeating.

The Warriors could become the first team with a rookie coach to win the title since Pat Riley with the 1982 Los Angeles Lakers.

But James is a threat for a breakout game at any stage after an all-around performance for the ages in the final.

“He’s phenomenal. He does everything,” Kerr said of James. “But I’m not enjoying the marveling.”

Cleveland guard J.R. Smith vows the Cavaliers will not go down without a fight.

“We just have to come out swinging. That’s the only thing we can do,” Smith said.

“We’re in a dogfight and our backs are against the wall. You just have to find a way to dig down and come up with those plays.”

Iguodala, who has come off the Golden State bench to tightly guard James and provide a speed and scoring spark, would be only the second teammate of an NBA MVP to win the NBA Finals MVP award, the first being Magic Johnson in 1980 as a Lakers rookie after Kareem Abdul-Jabbar won the season MVP award.

“We have to come out early and try to establish ourselves. The first few minutes is going to be really important,” Iguodala said. “They might be tired but they can push through (fatigue) for a game or two and we have to realize that.

“They are going to keep fighting. Their mentality is fight to the end. We know how tough it’s going to be. We’ve had some tough games closing out series and this will probably be 10 times as tough.”

But Golden State has the confidence to trade big shots with the game on the line or battle back from behind.

“It’s a very confident group,” Kerr said. “They have had a heck of a season and they are playing at a high level.”