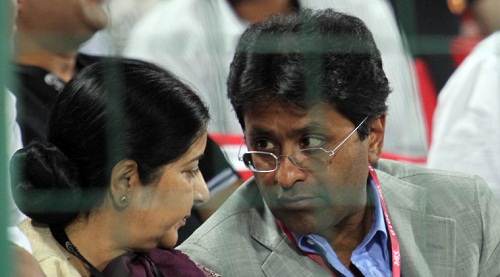 Mumbai: Claiming that Sushma Swaraj has been targeted under a “political game” to oust her from BJP, Shiv Sena on Tuesday said it is imperative for Prime Minister Narendra Modi to step in and order an investigation to know who is so keen on “maligning” her “clean” reputation.

Sena, which has come out in support of the External Affairs Minister in the row over helping scam-tainted former IPL Commissioner Lalit Modi obtain British travel papers, said Congress was “lifeless” and its reaction did not mean much but “who is trying to give flight to its wings”.

“The Congress party is behaving as if Swaraj has helped get bail to arrested fugitive gangster Dawood Ibrahim or Kasab. This controversy is being fuelled by using a section of the media. It is vital for Prime Minister Narendra Modi to order an investigation on who is so keen on maligning her clean reputation of 35-40 years,” the Sena said in an edit in its mouthpiece ?Saamana?.

“Covering Swaraj in a mist of controversy and questions seems to be a huge political game being played to oust her from the BJP and from national politics,” the Sena alleged.

It said that PM Modi too may get engulfed in such controversies in the future and that some of his cabinet ministers are being tactfully harassed.

The edit added that similar allegations had been levelled against Home Minister Rajnath Singh?s son in the recent past and also against Nitin Gadkari, when he took over as the President of the BJP.

“An Indian has been helped on humanitarian grounds. Why so much fuss over it? The Congress has become lifeless now and thus its flutter also does not mean much. But the question is who is trying to give flight to these fluttering wings,” the Sena said.

“If somebody is attacking the External Affairs Ministry to weaken it and thereby trying to demoralise the Modi government, the person is ultimately causing harm to the country. This a very big political game that needs to be ended by PM Modi,” it added.